In news that will come as little surprise to anyone who followed the Bay Area’s sizzling real estate market last year, the San Francisco metro area finished among the nation’s top three markets with the highest home price appreciation numbers in 2013.

According to the just-released December S&P/Case-Shiller report, home prices in San Francisco were up 22.6 percent year over year in December, trailing only Las Vegas by about three percentage points. As was the case in November, San Francisco was one of just three markets in the 20-city composite to post yearly increases of more than 20 percent.

On a month-over-month basis, home prices in San Francisco grew 0.2 percent in December, one of six metro areas in the composite to show positive gains from the previous month.

Home prices across the country rose 13.4 percent last year and increased in every market included in the report from the previous December. Thirteen of the 20 metro areas had double-digit price gains in the final month of 2013.

However, Blitzer warned that the strongest part of the housing recovery may be behind us, noting that monthly gains are beginning to lag. From November to December, the 20-city composite slipped 0.1 percent, the second straight month it has declined.

Taking a more granular look at our Bay Area regions, year-over-year, single-family home price appreciation was healthiest in December in Napa County, at 34 percent. Our Silicon Valley region was close behind, with yearly price gains of 32.5 percent.

Homes in the Sonoma Valley region dipped a slight 2 percent year over year. December was one of just three months in 2013 when the median sales price in Sonoma Valley dropped below the $500,000 mark. 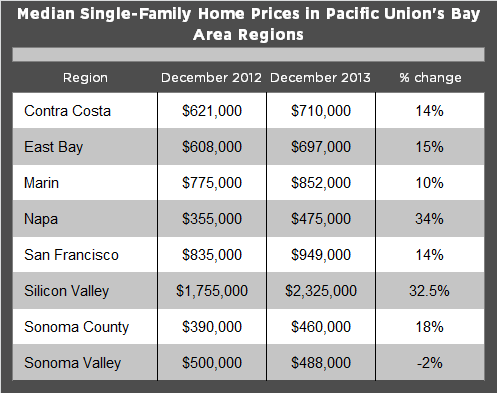