The San Francisco metro area has given up its claim as the home of the nation’s highest-rising housing prices.

The region posted the fourth-highest annual rise in home prices in the nation in January after two months at No. 1. That’s according to the latest S&P/Case-Shiller Home Price Indices, which are widely respected but run two months behind current results. 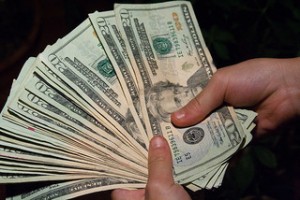 January home prices in the San Francisco area increased 7.9 percent from a year earlier, trailing Denver (up 8.4 percent), Miami (8.3 percent), and Dallas (8.1 percent). Nationwide, home prices in January were 4.5 percent higher than they were one year ago.

The results show that annual home price gains in the region are easing off from the rapid pace of the past two years, when they reached as high as 25.7 percent in the fall of 2013. In December 2014, the San Francisco area led the nation in annual price growth at 9.3 percent. In November, prices were up 8.9 percent.

The latest Case-Shiller numbers also reveal that home prices in the San Francisco area slipped 0.9 percent from December to January — the biggest decline among the nation’s 20 largest metro areas —  after a 0.5 percent rise from November to December.

“Regional patterns in recent months continue,” David M. Blitzer, managing director and chairman of the Index Committee for S&P Dow Jones Indices, said in a statement accompanying the results. “Strength in the west and southwest paced by Denver and Dallas, with results ahead of the national index in the California cities, the Pacific Northwest and Las Vegas. The northeast and Midwest are mostly weaker than the national index.

“Despite price gains, the housing market faces some difficulties,” he said. “Home prices are rising roughly twice as fast as wages, putting pressure on potential homebuyers and heightening the risk that any uptick in interest rates could be a major setback. Moreover, the new-home sector is weak; residential construction is still below its pre-crisis peak. Any time before 2008 that housing starts were as low as the current rate of one million, the economy was in a recession.”

Looking at more recent data for the Bay Area, the median single-family home price increased year over year in seven of Pacific Union’s nine regions in February, according to local MLS data.

The biggest increase was in our Silicon Valley region, where the median price rose by 21 percent to $2.8 million. At the other end of the spectrum, the median home price fell by 15 percent in our Sonoma Valley region to $540,000.

The chart below provides more information on annual Bay Area home price changes. Also, be sure to check out Pacific Union’s fourth-quarter 2014 real estate report for more in-depth sales data and information on how we define our regions.