We’ve always believed this, but it’s nice to hear it from others: People in the Bay Area are happier and more contented with their lives than residents of any other large U.S. metropolitan, according to an exhaustive, yearlong survey released last week. 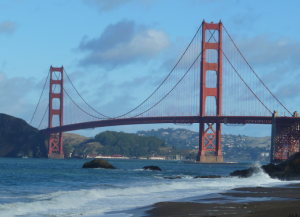 Even when compared with thousands of smaller, bucolic communities from Maine to Hawaii, the Bay Area still ranks in the top 10 for the physical and emotional well-being of its residents.

Gallup Inc. surveyed 178,000 people last year for its “State of American Well-Being” report. Respondents were asked about their perceptions of physical and emotional health; healthy behaviors; work environment; social and community life; financial security; and access to necessities such as food, shelter, and health care.

The survey defines well-being as how we think about and experience our lives — our overall happiness — and the results couldn’t be more clear.

Among the nation’s largest regions, the San Jose–Sunnyvale metro area ranked No. 1 for high well-being among its residents. The San Francisco–Oakland metro area — including San Francisco, Marin, San Mateo, Alameda, and Contra Costa counties — placed No. 2.

The survey was conducted for Healthways Inc., a corporate consulting firm, and the results make the point that high well-being is good for business because people with higher well-being cost less and perform better.

In the Bay Area, economic data bears out the survey’s conclusions. The Bay Area economy is one of the strongest in the country, and our unemployment rates are consistently below state and national averages. Job growth, in turn, is responsible for robust real estate activity in the region.