Homebuyers who purchase property in a walkable area will reap a number of benefits. First, walking is a low-impact but effective way to exercise while shopping or running errands. And even though residents of many Bay Area regions will still frequently need to drive, taking an occasional stroll helps cuts down on gas expenses and parking hassles. Finally, walking is an environmentally friendly way to get around that reduces local air pollution. 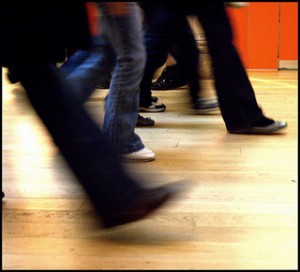 To find the most pedestrian-friendly regions of the Bay Area, we consulted Walk Score, an online service that assigns locations a  value on a scale of 100 based on the number of amenities within a quarter-mile distance. Here are the best neighborhoods, cities, and towns for Bay Area homebuyers who want to leave the car in the garage and lace up their walking shoes.

Buyers looking for walkable neighborhoods in Contra Costa County have decidedly fewer options than their neighbors farther to the west, but finding a home within a strolling distance from local businesses is not impossible. For instance, certain residential sections near downtown Danville score in the low 90s, which Walk Score deems a “Walker’s Paradise.” Likewise, some pockets adjacent to central Walnut Creek garner walkability ratings in the high 80s, which the website calls “Very Walkable.”

Overall though, the most walking-friendly city in the county was Moraga, which receives a ranking of 80.

All told, the East Bay offers a range of excellent locations for walkers. Walk Score awards Oakland’s Lakeshore, Temescal, and Upper Dimond neighborhoods scores in the mid-80s. In fact, the website names Oakland the 10th most-walkable large city in the U.S.

The small city of Albany is also stroll-friendly, with an overall score of 86, though the strip surrounding busy Solano Avenue notches a 92. The much more populous Berkeley receives an overall ranking of 82, but the 94704 ZIP code — which includes the area surrounding the Downtown Berkeley BART station — tops out at 88.

Pedestrian-minded buyers searching in Marin County will want to home in on the 7,500-resident town of Fairfax, which boasts a walkability ranking of 97 due in part to its compact size.

Those seeking a more populous but equally walkable option might consider Mill Valley, which receives a 92 on Walk Score’s scale. Sausalito and Larkspur are also rated quite walkable for Marin County at large, at 88 and 85 respectively.

Walk Score hands the city of Calistoga an overall rating of 92, thanks to the multitude of restaurants, shops, city agencies, and schools packed onto Lincoln Street and its surrounding blocks.

St. Helena, with a rating of 86, presents another choice for would-be Napa County residents who enjoy walking. Likewise, some residential sections of the city of Napa, including the city’s Old Town neighborhood, earn scores in the low 80s.

Homebuyers who are primarily pedestrians will no doubt consider San Francisco — rated by Walk Score as the second most walkable large city in the country — the most desirable location in the Bay Area.

Walk Score data places Chinatown as the city’s most pedestrian-friendly neighborhood, with a 99 rating, followed closely by the Financial District and Downtown. San Francisco is home to 31 neighborhoods with a score above 90, giving the city as a whole a rating of 85, just behind New York City.

The bottom line: Buying a home or condo in San Francisco will reduce — if not outright negate — daily reliance on an automobile.

Sonoma County offers a surprisingly large number of options for walkers. At the top of the list is Healdsburg, which scored a 98, one of the highest numbers in the entire Bay Area.

Sebastopol has an overall walkability rating of 94, thanks to the high concentration of restaurants, shops, and other businesses that line Main Street. Homebuyers who want to live in a larger Sonoma County locale might explore residential neighborhoods near downtown Santa Rosa; for instance, the centrally located Cherry Street Historic District receives scores in the low 90s.

With a walkability score of 95, the city of Sonoma is the best option for pedestrians seeking a home in the Sonoma Valley region. In particular, the blocks surrounding Sonoma Square offer enough restaurants and shops to suit all tastes.