One of the most common reasons apartment dwellers give for purchasing a single-family home is the desire for more space. Another bedroom, perhaps, or a private office or den. And a family room with enough space to accommodate a “Guitar Hero” showdown. 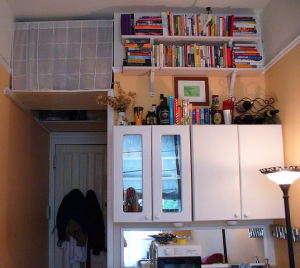 So imagine the pent-up desires of people who live in microapartments — living spaces so small they redefine the concept of cozy.

In Seattle, some residents are living in apartments as small as 90 square feet. That’s the size of a guest bathroom in many Bay Area homes.

An article on the Gizmodo website notes that a quirk in the Seattle housing code allows developers to count kitchens, not bedrooms, when defining housing units, so several microapartments share kitchen space to meet the letter of the law. Accordingly, one Seattle development has 64 living spaces in a building that would typically hold eight units.

But these microscopic apartments can still command eye-popping price tags per square foot. In San Francisco, the smallest condominium for sale in the third quarter of this year was just 311 square feet, according to MLS data. It eventually sold for $381,000 — slightly more than original price — for a price per square foot of $1,225.

Gizmodo notes that the United States is hardly the leader in microhousing. “Japan, Hong Kong, and much of Europe have been doing tiny apartments better than us for years,” the article says. “But culturally we’re moving in that direction: 28 percent of all American households were made up of single people in the 2010 census, a number that’s been growing since the 1970s.”