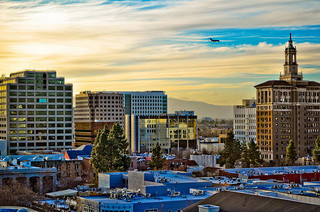 The study also found that sales volume in San Francisco grew 9.1 percent, well above the national average year-over-year increase of 0.6 percent. Inventory, which has declined 10.4 percent in the U.S. since October 2012, shrunk by only 1.4 percent in San Francisco. In San Jose, inventory actually increased year over year by 1.9 percent.

Citing figures obtained from DataQuick, SFGate states that 7,595 homes and condos sold in the Bay Area last month, a decrease of 3.9 percent from October 2012. At the same time, the median home price showed its 19th straight month of year-over-year gains and is currently $539,750 — a jump of almost 30 percent since last October.

According to the article, local buyers may be getting some relief from price reductions. Price cuts accounted for 20 percent or more of transactions in eight local counties in September. San Francisco had the lowest rate of homes with price chops in the region, at 13 percent.

U.S. HOMEOWNERSHIP RATE DECLINED OVER PAST THREE YEARS
The percentage of homeowners in the U.S. shrank between the years 2010 to 2012 compared with the period between 2007 and 2009, according to the U.S. Census Bureau’s latest American Community Survey.

When examining the 50 largest U.S. metropolitan areas, the survey found that homeownership rates declined to 53.68 percent in San Francisco and 57.06 percent in San Jose, losses of 2.49 and 2.47 percent, respectively.

Last month’s U.S. government shutdown had the expected negative impact on consumer confidence in both the housing market and the economy, according to Fannie Mae’s October 2013 National Housing Survey.

The survey, which was conducted while the government closure was in effect, found that just 65 percent of respondents considered it a good time to purchase a house, the lowest in the survey’s three-year history. Despite the dip, homebuyers and sellers should still expect longer-term price appreciation, according to Doug Duncan, Fannie Mae senior vice president and chief economist.

“While this decline in consumer optimism may portend a slowing of the housing recovery, supply constraint data suggest that we are likely to see continued positive growth in home prices,” Duncan said in a statement accompanying the survey results.

The shutdown also clearly rattled consumer confidence in the national economy. In October, the number of respondents who felt the economy was on the right track dropped to 27 percent, a 12 percent month-over-month slide and the largest monthly decline in the survey’s history.