Bay Area residents who plan to put their homes on the market this year should consider replacing doors, the home improvement expected to yield the highest return on investment locally, according to the 2015 Cost vs. Value Report by the Remodeling website. 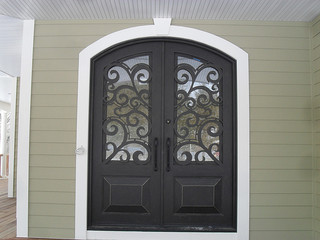 The report, which ranks 36 “midrange” and “upscale” home-improvement jobs by the percentage of value they are projected to retain or add at the time of resale, predicts that new entry and garage doors should pull in the largest returns in 2015 in the San Francisco, San Jose, and Santa Rosa metro areas.

In the San Jose region, homeowners who add a steel entry door, at an average cost of $1,420, can expect a return on investment of 235.6 percent, the largest for any home-improvement project in that area, the Cost vs. Value Report says. Steel front doors also top the list of renovations that add the most value in the San Francisco metro area, with the average $1,482 door expected to recoup 221.3 percent of its cost.

Across the U.S., steel front doors were the only one of the three-dozen home improvements predicted to net a positive return on investment this year, at 101.8 percent. In the San Francisco area, 23 of the remodeling jobs are projected to yield returns of more than 100 percent.

Bay Area home sellers who install new garage doors this year could also reap financial rewards, according to Remodeling. The company predicts that in the Santa Rosa metro area, a midrange garage-door replacement – projected to cost an average of $1,775 – will yield a return on investment of 146.8 percent, a regional high.

Garage doors are also near the top of the list for the largest value-to-cost ratios in the San Francisco and San Jose metro regions. A midrange garage door replacement in San Francisco should net sellers an average return on investment of 157.9 percent (No. 2), while its upscale counterpart is expected to recoup 156.2 percent of costs (No. 3).

In the San Jose region, upscale garage doors are expected to add slightly more value than midrange ones: 161.1 percent (No. 2) and 159.9 percent (No. 3), respectively.

Window replacements and kitchen upgrades also landed among the top five renovations with the largest return on investment in the Santa Rosa area, although Remodeling’s content-licensing policy prohibits us from publishing additional numbers. To download the full reports, you must register at the company’s website.

Bay Area homeowners who have made improvements can expect to take in a significantly higher return on investment than the nationwide rate of 62.2 percent. The 2015 Cost vs. Value Report predicts that, on average, the aggregate 36 home-improvement projects will recoup 100.3 percent of their costs in San Francisco this year, the highest in the nation. San Jose residents are projected to receieve an average return on investment of 87.1 percent, third most in the U.S.