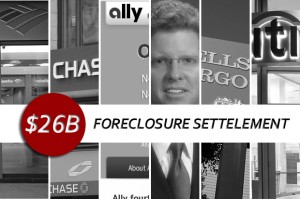 The big news this week was the $26 billion mortgage settlement, in which five banks (Wells Fargo, Bank of America, Ally, Citi, and JPMorgan Chase) came to a deal with state and federal authorities to give relief to millions of homeowners.

It’s news that’s likely to spur plenty of conversation and debate, especially from people who are considering buying or selling property or who are in that unfortunate majority – the underwater owners who are current on their payments but stuck with a house worth less than what they owe on it.

Here’s what you need to know.

What Is This Settlement?
It’s the culmination of a long series of legal actions by government authorities to hold banks accountable for a variety of mortgage-related concerns, including faulty foreclosures, so-called “robo signings,” and paperwork snafus.

The settlement provides for financial relief for American harmed by these practices in return for securing guarantees to the banks involved that they wouldn’t face lawsuits from federal agencies and 49 state attorneys general (Oklahoma was the sole holdout in the agreement).

According to the New York Times, the bulk of the settlement would go to one million American homeowners who would have their mortgage debts reduced or their loans refinanced at a lower interest rate. It also includes $1.5 billion for roughly 750,000 people who lost their homes to foreclosure between 2008 and 2011, with each receiving between $1,500 and $2,000.

But about half of residential mortgage holders will be left out of the equation because their loans are owned by the government’s housing finance agencies, Fannie Mae and Freddie Mac, and are not covered under the deal.

There’s a lot yet to be ironed out about the settlement, and scant information to be found on the official website set up to answer questions (www.nationalmortgagesettlement.com).  But here’s a summary of what we know so far.

Who Will Get the Money?
There are three main categories of people who’ll benefit from the agreement, either with direct financial assistance or with the opportunity to rework or refinance loans:

• Underwater homeowners, who are current on payments but owe more than their homes are worth, may
be able to refinance older, high-rate loans at the current, rock-bottom rates
• Delinquent borrowers or those at risk of defaulting may get a reduction in loan principal or other modifications
• Borrowers who lost their homes to foreclosure between Jan. 1, 2008, and Dec. 31, 2011, will receive
cash payments of around $2,000

Unemployed borrowers and those in the military may also receive assistance.

How Will California Benefit?
California stands to receive at least $12 billion and up to $18 billion in the settlement, a reflection of the disproportionate number of loans that are delinquent or exceed the value of the underlying property here.

Attorney General Kamala D. Harris obtained separate, enforceable guarantees to ensure that banks will be accountable for their commitments to California. These guarantees also create  important incentives to ensure that banks will reduce the principal mortgage balance of underwater homeowners in California’s hardest-hit counties and that the principal reductions in these communities will occur within the first year of the settlement.

In our area, the counties who took the brunt of the hit were Contra Costa, Napa, and Sonoma. Regionally, Solano, San Joaquin, Santa Clara, Sacramento, and Stanislaus – the ill-fated “S” counties – were pummeled.

Specifically for California, here’s how these guarantees look today, according to the Central Valley Business Times:

Who Isn’t Eligible?
Anyone whose loans are held outside the five banks listed above. If Fannie Mae or Freddie Mac, a private investor, or a bank not included in the settlement holds a homeowner’s loan, he’s not eligible for relief from this deal.

When Will This Happen?
Probably not in the immediate future, and you won’t know if you’re eligible for a while either. The servicers who are part of the settlement will be working over the next six to nine months to determine which borrowers are eligible for relief; the settlement rules require payments and relief to happen sometime within the next three years, although the banks have incentives to do it earlier.

What does the mortgage settlement mean for the market?
That is a bigger question, and the jury is still out. I plan to blog about this question, as well as what might happen to people who hold mortgages above $750,000, next week – so stay tuned!