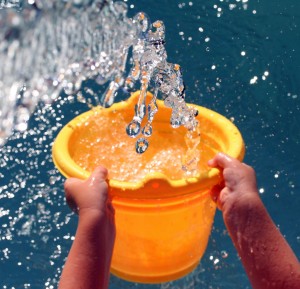 NEED A BUCKET? MANY HOMEOWNERS STILL UNDERWATER
Despite rising home prices and improvement in home equity, nearly half of homeowners with a mortgage are still underwater.

That’s the word from Zillow’s first-quarter Negative Equity Report, which analyzes how many homeowners owe more on their homes than they’re worth — or don’t have enough equity in the property to move. More than 25 percent of homeowners with a mortgage were underwater, while an additional 18.2 percent had less than 20 percent equity.

“Reaching positive equity, even barely, is an important milestone,” Zillow Chief Economist Stan Humphries said in a statement. “But things like real estate agents’ fees and a down payment for the next home traditionally come out of the proceeds from the prior home’s sale. Without enough equity, these cost will instead have to come out of a homeowner’s pocket, leaving many still stuck.”

SOME BORROWERS BECOMING ACCIDENTAL LANDLORDS
So what’s an underwater homeowner to do? In some cases, become a landlord — not by choice, but from necessity.

CNBC describes how some move-up or move-on buyers, unable to sell their current properties, are now renting out their homes instead. The approach brings in some much-needed cash but can also result in headaches, including nightmare tenants, long-distance property-management challenges, and rent-collection problems.

While there are no real estimates of how many “accidental landlords” now inhabit the housing market, real estate professionals say they’re partially to blame for today’s low inventory issue, CNBC reports. Usually a buyer is also a seller, making the transaction a wash in terms of inventory. But if the buyer doesn’t sell and instead becomes a landlord, inventory takes a negative hit.

GLOBAL RENTS RISING
Rents in the Bay Area have reached new highs over the past couple of years, but hefty price hikes for tenants aren’t unique to our region.

Indeed, a new report from London-based global property consultancy Knight Frank shows rental prices around the world are rising. Global rents have jumped more than 5 percent over the past year, according to Knight Frank.

MEET THE PRICIEST HOME IN AMERICA
Got some extra cash lying around? Then perhaps we could interest you in Copper Beech Farm, an estate perched on Long Island Sound in Greenwich, Conn.

The home boasts the distinction of being the most expensive single-family home for sale in the United States, listed at a whopping $190 million. (Yes, $190 million – that wasn’t a typo.) What does that kind of cash get you? SFGate says it features a 13,519-square-foot French-renaissance mansion with 12 bedrooms, seven full baths, two half baths, library, solarium, wine cellar, and an entire floor for staff.