As the U.S. housing stock increasingly shows its age, home-remodeling activity is nearing heights not seen since the previous housing boom. And homeowners who can handle the renovations themselves can realize significant costs savings. 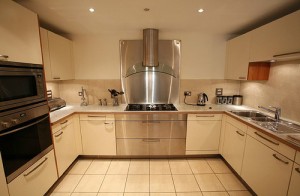 Citing data from the Harvard Leading Indicator of Remodeling Activity, John Burns Real Estate Consulting’s Feb. 9 U.S. Housing Analysis and Forecast says that Americans spent nearly $150 billion on home remodeling and repairs in the fourth quarter of 2014, nearing peak levels recorded in 2007. And given that the average U.S. home is about 40 years old, spending on renovations is likely to increase in the coming years, says the National Association of Realtors.

In a recent blog post, NAR said 40 percent of homes in the country were built prior to 1970. Such homes accounted for 42 percent of improvement loans in 2013, says JBREC, with Americans taking out almost $15 billion in home loans to renovate properties built in 1969 and earlier.

Both homeowners who need to spruce up their properties in advance of a sale and homebuyers who are considering a fixer-upper can save a significant amount of cash by performing the labor themselves. For example, while the median cost for a professional kitchen remodel comes in at close to $36,000, those with the do-it-yourself approach could expect the same job to cost $15,000. DIY bathroom remodels cost about $5,000 less than professional jobs, and handy homeowners can save nearly $7,000 by overhauling a bedroom on their own.

NAR says that even though a home-improvement project can seem like an expensive and overwhelming task, first-time buyers may be better off purchasing an existing property that needs work rather than a newly built home.

“Many factors come into play in choosing a home, but first-time homebuyers may need to better appreciate the financial benefit of purchasing an existing home as a starting point for homeownership, instead of ‘saving up for a new home,’ ” the organization said in a statement.

Since every remodeling job is different, costs will of course vary by project, although a look at JBREC data offers some perspective. The company pegged the average home-improvement loan at $84,000 in 2013, compared with a 2005 peak of $94,000.