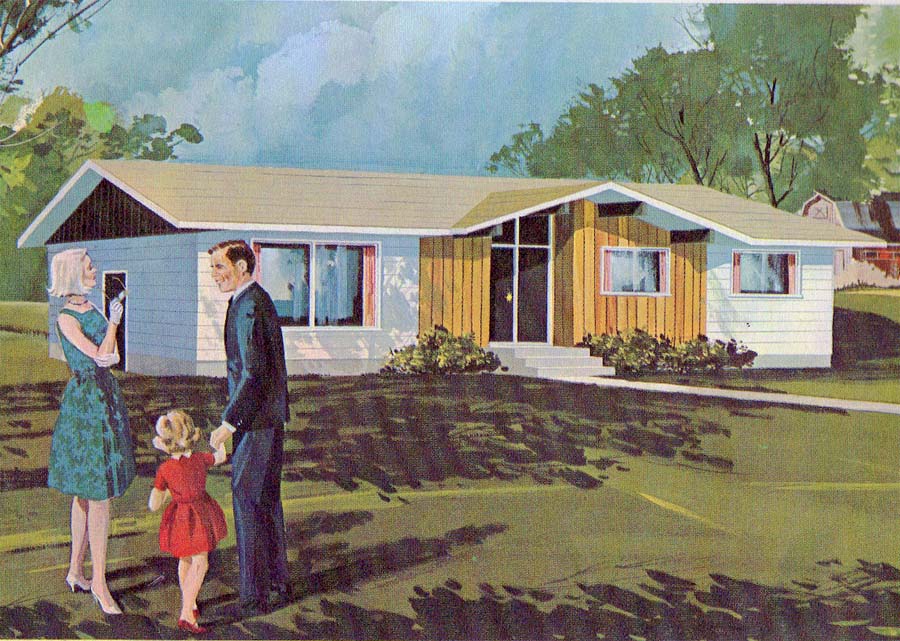 Of course, the average American home today is markedly different than the average home in the 1950s and ’60s, but you may be surprised to learn just how different they are — in ways you might not have expected.

Fielding Homes, a North Carolina homebuilder, recently produced an interactive graphic that pulls together diverse data sets to show some of the dramatic changes in home design and tastes over the last few decades:

1950s: The average new home sold for $82,098. It had 983 square feet of floor space and a household size of 3.37 people, or 292 square feet per person. Homes had more shower space than sleep space: 1.5 bedrooms and 2.35 bathrooms. The most popular colors for kitchen appliances were canary yellow and petal pink.

1960s: The average new-home size grew to 1,200 square feet, giving its 3.33 residents a spacious 360 square feet of room apiece. The bedroom-bathroom ratio flipped from the previous decade, with 2.5 bedrooms and 1.5 bathrooms. Turquoise and coppertone were the appliance colors of choice. The average price: $118,657.

1970s: Homes continued to get bigger — an average of 1,500 square feet. With the household size shrinking to 3.14, each person luxuriated in 478 square feet of personal space. The average price was $160,338. Kitchen appliances achieved an iconic color balance: avocado and harvest gold.

1990s: The average new home sold for $268,055. It had 2,080 square feet of floor space and a household size of 2.63 people, or 791 square feet per person — enough to make those luxurious accommodations in the 1970s look positively skimpy. In the kitchen, black was the favorite color for appliances. The number of bedrooms and bathrooms were little changed from the 1960s: three and two, respectively.

2000s: The amount of square feet per person continued its inexorable climb, now at 865 (2,266 total square feet for a household of 2.62 people). The price: $281,141. The number of television sets per household reached two for the first time. Black appliances gave way to stainless steel — a sign of the new millennium?