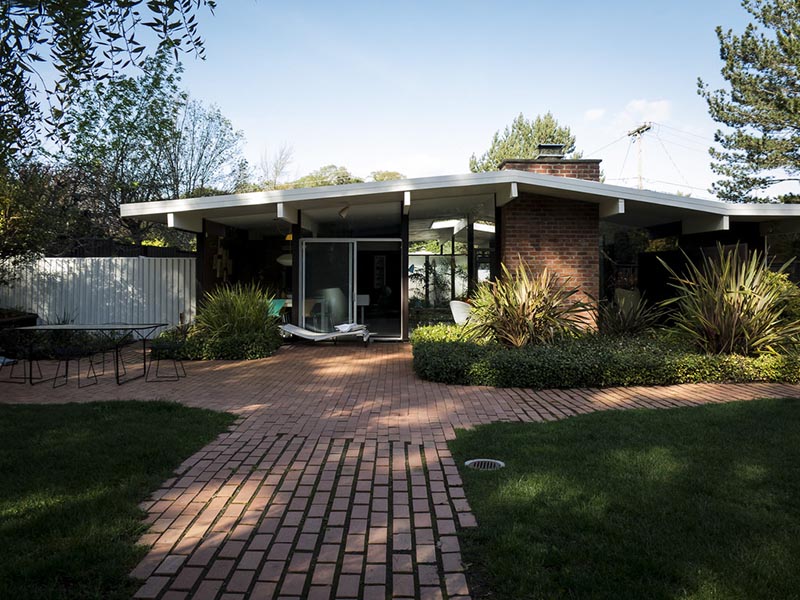 This is the third installment in a series of bimonthly posts about architecture styles, each dedicated to a popular home type that can be found in the Bay Area.

Included in the Mid-century modern category are Ranch-style, Split-Level Ranch, Contemporary, and Shed-style homes. You can read more about these substyles in this CIRCA Old Houses article. (Warning: eye candy ahead.)

Flat, low-pitched roofs; sharp angles; and an open design concept are all hallmarks of the Mid-century modern home. If you can picture the home styles highlighted in the television show “Mad Men,” you get the idea. And, speaking of “Mad Men,” we think if the Mid-century modern home was a drink, it would definitely be a well-aged scotch, served neat.

Grown-up and a bit on the serious side, the Mid-century modern home removed the frills and added a touch of the future. A pared-down aesthetic, clean lines, and natural hues are hallmarks of Mid-century modern design. And with expansive walls of glass, this style also considered outdoor space in its philosophy of the home. The indoor-outdoor living concept was new to home design in the 1950s.

Bay Area residents are likely familiar with Eichler-style homes and may have wondered why a developer became so well-known that his name has become closely associated with the Mid-century modern style. According to the Eichler Network, Joseph Eichler (1900-1974) built nearly 11,000 single-family homes in California beginning in the late 1940s.

Interested in learning more about the Mid-century modern home? This Pocket Guide to Mid-Century Modern Style is a nice resource and includes more information about furniture, color schemes, and home accessories. The Mid-Century Modernist website is a tribute to the movement and features articles about homes, culture, architecture, and interiors. Make sure to check out this HGTV page all about Mid-century Modern architecture, which covers key elements and famous examples; don’t forget to take the video tour of a home while you are there. Still can’t get enough photos of Mid-century modern homes? Browse this gallery of Mid-century Modern Homes Across America, presented by Dwell.

If you are lucky enough to live in a Mid-century modern home, congratulations on having very good taste in design. And, if you are a home shopper on the hunt for the perfect sleek beauty, we hope you will soon be dwelling in your own modern marvel.