It’s no accident that home prices in the Bay Area have been rising steadily while the region’s economic recovery outpaces that of California and the nation.

Here at Pacific Union we’ve regularly pointed out that strong job growth has benefited homebuyers and sellers in our real estate markets. And as conditions keep improving, others are taking notice.

Earlier this week, both The Wall Street Journal and USA Today noted that rising prices in the San Francisco metropolitan area are sustainable because of its strong economic base. The Journal put San Francisco on its “Who’s hot” list of strong real estate markets, while USA Today, referring to Phoenix, San Francisco, and Las Vegas, said that “the three cities with the strongest price growth year-over-year all posted faster job growth than the national average.”

Both newspapers were reporting on the latest Case-Shiller home price index. San Francisco prices were up 19 percent in February from a year earlier, second only to Phoenix (23 percent) and just ahead of Las Vegas (18 percent). USA Today noted that San Francisco’s February job growth, at 3.6 percent, was more than double the national average of 1.5 percent.

More-recent statistics confirm that Bay Area housing markets continue to grow as the economic recovery shows no sign of slowing.

The Bay Area median home price, meanwhile, was up 33 percent in March from a year ago, and the velocity in our markets during the first quarter of 2013 has been amazing. As we outlined in our recent Quarterly Report, home sales have accelerated, multiple offers are common, and all-cash transactions comprise nearly of sales in some regions. 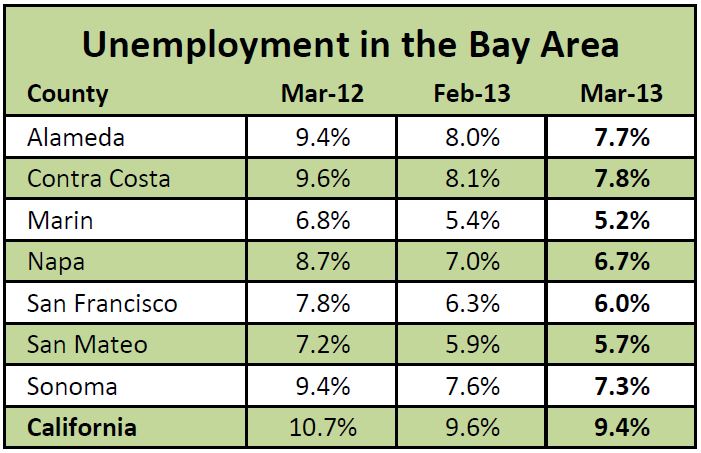