Good news, California! When the zombie apocalypse comes, it will almost certainly bypass the Golden State. 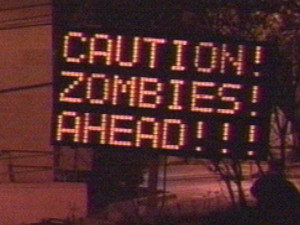 We’re talking, of course, about the attack of zombie foreclosures of the real estate variety. If you’re worried about flesh-eating undead demons, keep right on worrying.

“Zombie foreclosure” is an actual phrase used by housing market experts to describe a house in the foreclosure process that is vacant – abandoned by its owner on the sometimes-mistaken assumption that the mortgage holder will take it over.

Zombie foreclosures are a real problem, because the unattended properties often become neighborhood eyesores, limiting their own sale prospects as well as that of their neighbors.

In California, however, zombie foreclosures were way down in the third quarter of 2014, falling 56 percent from a year earlier, according to a report from the RealtyTrac. In fact, our state posted the third-biggest drop in zombie foreclosures in the nation, putting a stake in the heart of any talk of foreclosure wickedness here.

“The most effective preventative vaccine for the blight caused by vacant, abandoned foreclosures has proven to be a short and efficient foreclosure process,” RealtyTrac Vice President Daren Blomquist said in a statement accompanying the report.

“Absent that, the best antidote for a zombie foreclosure infestation is a proactive land bank program, like that in Cleveland and, more recently, Chicago, designed to aggressively take possession of vacant foreclosures and rehab or demolish them.”

U.S. housing markets have recovered much of the ground lost in the most recent crisis and recession, particularly those in the Bay Area and the rest of California. But  zombies are still lurking in many housing markets.

“Markets with lengthy and lengthening foreclosure timelines have unintentionally created a zombie foreclosure breeding ground,” Blomquist said. “As we see a backlog of delayed distress finally hit the foreclosure pipeline in some of those markets, the problem is coming more to light.”

In the third quarter, 16 states saw increases in owner-vacated foreclosures from a year ago. States that saw the largest increases in zombie populations were New Jersey (up 75 percent), North Carolina (65 percent), Oklahoma (37 percent), and New York (30 percent).

Nationally, zombie foreclosures in the third quarter were down 23 percent from a year ago but still accounted for 18 percent of all active foreclosures — a scary number for sure!

Those homes will likely end up as short sales, foreclosure auction sales, or bank-owned sales — once the new owner wipes up the fake blood and peels off the phony gaping wounds.