The latest employment numbers confirm that the Bay Area continues to drive California’s economic recovery, with employers increasingly calling back laid-off workers and thousands of new jobs helping to expand the economic base — and keep our real estate markets busy well into the new year.

Even more encouraging are the numbers for new-job creation: an increase of 268,800 jobs (1.9 percent) statewide over the past 12 months. 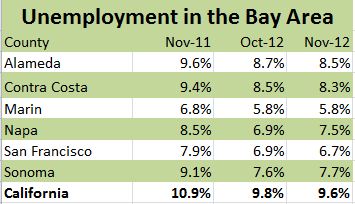 “The Bay Area remains the state’s job growth leader with 94,800 additional jobs during the past 12 months, for a strong gain of 3.0 percent,” according to Stephen Levy, director of the Palo Alto-based Center for Continuing Study of the California Economy, in a report analyzing the EDD’s November employment numbers.

“Since December 2009 the Bay Area has added 165,300 jobs, with most of the gains from the San Francisco and San Jose metro areas,” Levy said. The East Bay has increased hiring, too, with 20,200 new jobs over the past year.

Levy said he expects California “will outpace the national average in job growth” based on three factors: the continuing surge in employment, new leases, and building by tech companies in the Bay Area; an expected surge in residential building as the housing market heals, foreclosures decline, and supply remains tight; and continued strength in tourism, agriculture, and exports.

(Photo of San Francisco homes courtesy of J.G. in S.F., via Flickr.)