High-tech firms unlocking substantial amounts of wealth during and after IPOs are helping drive robust job and income growth across Silicon Valley. According to a recent article in The New York Times, Facebook’s IPO created in the neighborhood of 1,000 new millionaires, while Twitter’s offering could produce even more. 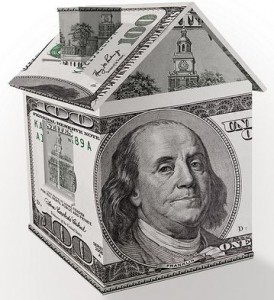 As the economic and housing recovery has taken hold firmly across the Bay Area, San Mateo County has fared particularly well. As of December the unemployment rate in the county was 4.6 percent, the second lowest in the state, according to the California Employment Development Department.

The Bay Area’s thriving economy has undoubtedly buoyed the region’s housing market over the past three years, particularly in southern areas of San Mateo County. Combined data from Atherton, Menlo Park (excluding the Alpine Road area and east of U.S. 101), Portola Valley, and Woodside shows that the median sales price and price-per-square-foot appreciation both outpaced the number of homes sold by more than 200 percent between 2011 and 2013. 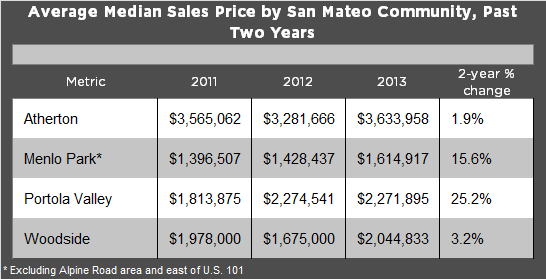 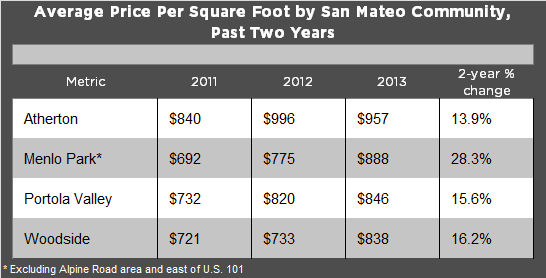 The number of homes sold in these four San Mateo County communities has grown by just a few percentage points each year and increased a total of 6.9 percent from 2011 to 2013, according to data gathered from MLSListings on Feb. 28. In that same time frame, the combined median sales price shot up 25.4 percent, while the average price per square foot grew a healthy 23.6 percent.

Meanwhile, the combined months’ supply of inventory in the four communities has slowly but steadily declined, from 3.5 in 2011 to 3.1 in 2013. Further constricting inventory in the region is an influx of foreign buyers, who often purchase properties as an investment without returning an existing home to the market, helping push prices even higher.

Serious home hunters in this prestigious region of Silicon Valley shouldn’t just assume that price appreciation will level out soon and would do well to weigh the potential consequences of waiting to enter the market.

The median sales price gain in the four communities was virtually nonexistent from 2011 to 2012, when it inched up a combined 0.7 percent. Nearly all of the market lift came between 2012 and 2013, when prices gained 24.5 percent. The median sales price for a single-family home in Atherton, Menlo Park, Portola Valley, and Woodside averaged $2.02 million in 2013.

Average price paid for square foot increased at a steady pace over the past two years, rising 10 percent from 2011 to 2012 and 12.5 percent from 2012 to 2013. Throughout the recently completed calendar year, buyers in the four communities paid an average of $886 per square foot.

“Just like in a falling real estate market, the first to sell an asset generally sets the comparables for all others to react to,” says Mark A. McLaughlin, CEO of Pacific Union. “The same holds true for buyers at present – if you reach for the right price now, the next buyer will end up paying a higher median or price per square foot.

“The continued constraint of supply against the velocity of existing demand, if sustainable, could drive single-family-home median prices to approach $1,300 per square foot in 2016,” he says.

In an inventory-starved market, a logical conclusion is that prices will continue to rise throughout 2014. Deciding to act sooner rather than later decreases your chance of getting priced out of this superheated Silicon Valley market.