The San Francisco metro area is one of just three major U.S. regions where year-over-year home prices are still growing by double-digit percentage points, according to the latest S&P/Case-Shiller Home Price Indices. 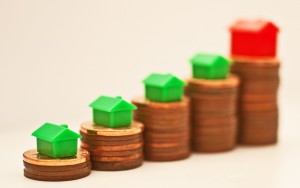 S&P/Case-Shiller’s data says that annual home prices in the San Francisco region increased by 10.3 percent in July, the third-largest gains of the 20 major U.S. metro areas included in the index. Across the index’s 20-city composite, home prices grew by 6.7 percent from July 2013.

Still, the rate of annual appreciation in the San Francisco metro area has slowed significantly since earlier in the year; as recently as March, home prices in the region were up year over year by more than 20 percent as measured by the index.

San Francisco was also the only metro area included in the 20-city composite to post a monthly decline from June to July, with home prices falling by 0.4 percent.

“At the bottom was San Francisco with its first decline this year and the only city in the red,” David M. Blitzer, chairman of the Index Committee at S&P Dow Jones Indices, said in a statement. The report notes that July’s month-over-month price drop was the largest recorded in the region since February 2012.

A look at MLS data reveals that the median single-family home price increased in every one of Pacific Union’s Bay Area regions year over year in July. Annual home price gains were largest in Sonoma Valley, up 41 percent from July 2013. At $750,000, Sonoma Valley’s July median sales price reached a two-year high.

Home price growth across our other regions ranged from 25 percent in San Francisco to 4 percent in Marin County. 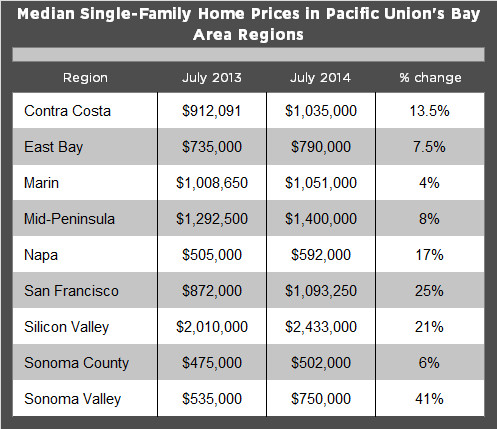