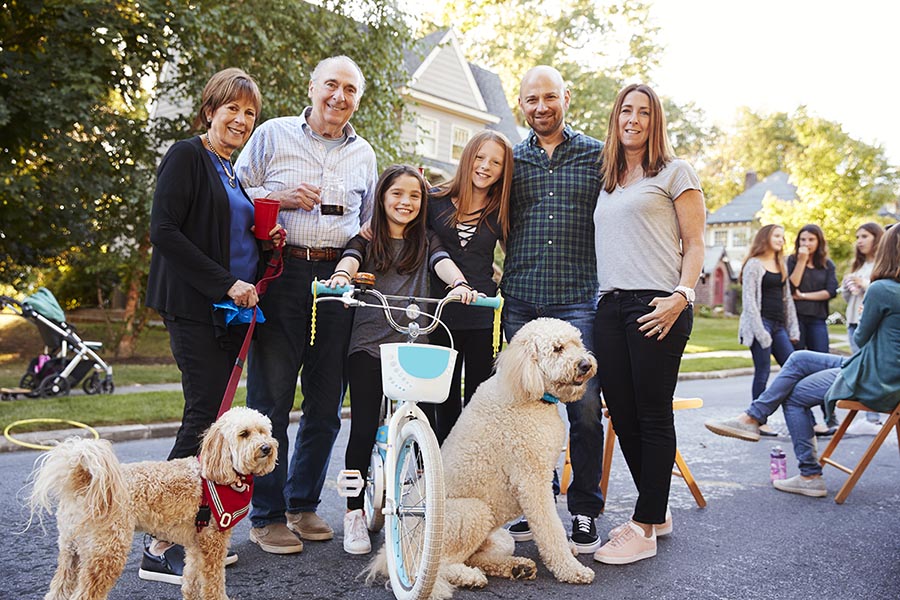 THREE-QUARTERS OF HOMEOWNERS SAY THEY HAVE GOOD NEIGHBORS

Here is some promising news for anyone who is planning a move: There’s a better-than-average change that you’ll like your new neighbors.

Realtor.com’s 2018 Good Neighbors Report found that 77 percent of Americans think that they have good neighbors, compared with just 7 percent who believe the opposite. Males are more likely (82 percent) to say they like their neighbors than females (72 percent), and those age 55 and older have slightly better neighborly relations than other generations.

What makes a good neighbor? The No. 1 attribute is trust, cited by 59 percent of respondents and the top good-neighbor quality across both genders and all age groups. Trustworthy neighbors are followed by those who are quiet (50 percent), friendly (46 percent), and respectful (43 percent). By comparison, building a friendship with neighbors is the least important factor (14 percent).

Anyone who strives to be the best neighbor possible should respect their fellow residents’ privacy, as nosiness is the top neighbor annoyance according to a survey conducted by Porch earlier this year. That poll also underscored the importance of minimizing household noise, which comes in as the No. 2 gripe that Americans have with their neighbors.

CALIFORNIANS BLAME LACK OF RENT CONTROL ON THE STATE’S AFFORDABILITY CRISIS
Although most economists and housing experts agree that California’s shortage of affordable housing stems from insufficient construction to meet demand, residents of the state point to a different scapegoat

A poll conducted by the Los Angeles Times and University of Southern California, Dornsife found that 28 percent of Golden State residents think that a lack of rent control is the root of the housing-affordability problem, followed by 24 percent who say that there is not enough funding to build residences for low-income citizens. Just 13 percent of those surveyed pointed to inadequate construction, the sixth lowest out of eight proposed reasons.

Currently, only 4 percent of nearly 550 California cities and counties are on pace to meet their housing-supply goals. And although the state government is attempting to remove hurdles to more new developments, 69 percent of Californians believe that such decisions should be left to local governments.

ONE-QUARTER OF SILICON VALLEY HOMEOWNERS WERE BORN ABROAD
A recent analysis ranked California as America’s most diverse state, so it’s no real surprise that four of the nation’s top five cities with the most foreign-born homeowners are located here.

That’s according to a LendingTree report, which found that 24.8 percent of homeowners in the San Jose metropolitan area were born outside of the U.S., second in the country to only Miami. Los Angeles ranks No. 3 for most immigrant homeowners (18.3 percent), followed by No. 4 San Francisco (17.9 percent), and No. 5 Riverside (17.3 percent).

LendingTree Chief Economist Tendayi Kapfidze explains why people born outside of the U.S. tend to own homes in higher-priced regions of the country. “This is not to say that immigrants raise home prices — rather, it’s likely that immigrants gravitate towards these cities which have higher home prices, as they also have more dynamic economies and thus more employment opportunities,” he says.

SOUTHERN CALIFORNIA MAN SELLING ESTATE HE PURCHASED WITH LOTTERY WINNINGS
A San Bernardino County man, himself a big lottery winner, hopes to get a call from the lucky $1.5 billion Mega Millions ticket holder from South Carolina.

As The Wall Street Journal reports, a former roofing-products manager named Rick Knudsen is listing his palatial, 16,000-square-foot home near the city of Yucaipa for $26 million. Four years ago, Knudsen won $180 million in the California Mega Millions lottery, quit his job, and purchased a home that was under construction on the side of a mountain near his home for $5.5 million. In addition, Knudsen picked up a 155-acre buffalo ranch, 640 more acres of land, a steakhouse, and a bar, eventually spending a total of $11.5 million.

The estate features a laundry list of luxury amenities, including a 17-seat cinema, an elevator, a gym, and a stocked fishing pond. So why does Knudsen, who is represented by Pacific Union real estate professional Craig Strong, want to unload his piece of Southern California paradise after completing it just six months ago?