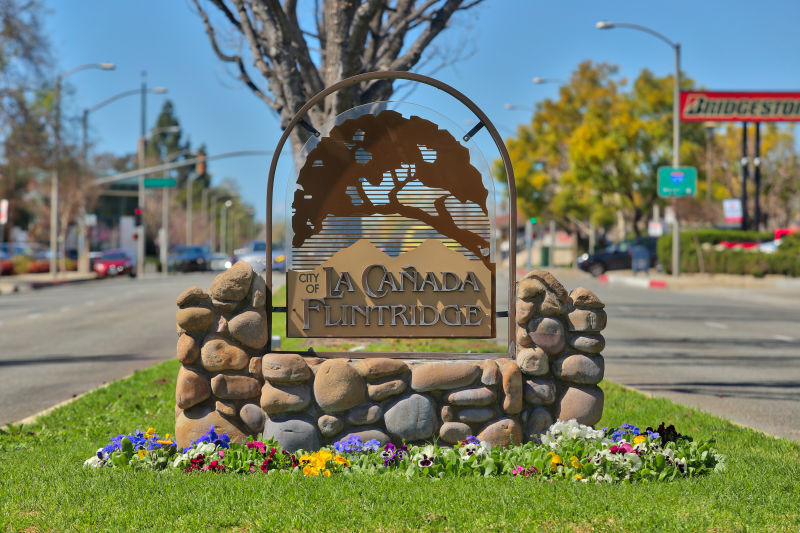 Nestled in the Crescenta Valley between the Verdugo and San Gabriel Mountains, the town of La Cañada Flintridge feels semi-rural, surrounded by valley vistas, scenic foothills and the nearby Angeles National Forest. The city limits extend into the San Gabriels and reach 3,440 feet along the crestline well above the developed city. Despite its small-town feel, it’s a short commute from Pasadena, Burbank, Glendale, and Downtown LA. Ranked the fifth-wealthiest zip code in LA County in 2017 by data mapping firm Esri, the city is known for outstanding schools and affluent residents. An array of film industry leaders and professional athletes continue to be drawn to its low-key charm.

A colorful history
The roots of La Cañada Flintridge trace back to the Spanish and Mexican eras, when the area was known as Rancho La Cañada. The first transplanted Easterners began staking out homesteads in the valley in the 1860s, shortly after California acquired statehood. People suffering from tuberculosis and other lung disorders flocked in from across the country, lured by the fresh air and drier climate. Within a few decades, much of the area was covered in olive and orange groves. When the arrival of electricity in the 1900s brought trolleys from Glendale and Los Angeles, two tracts were laid out to accommodate the demand for suburban housing: Alta Canyada and Flintridge. In 1915, Dr. Roy Lanterman, son of one of the founders of La Cañada, commissioned an Arts and Crafts-style “bungalow” (estate) in the area. The 11,250 square foot home, now a museum, retains much of its original furniture and finishes, including a grand ballroom that occupies the entire second floor and Dr. Lanterman’s basement consulting rooms. It sits on 1.4 acres of restored lawns, gardens and majestic oak groves. After decades as separate cities, La Cañada and Flintridge incorporated as one municipality in 1976 to avoid annexation by Pasadena and Glendale.
Coming home to La Cañada Flintridge
Houses in this beautiful community are in high demand. Finding and buying the ideal property here requires a professional with an intimate knowledge of this unique community, upcoming offerings and pocket listings – backed by a team of collaborative colleagues. That team lives in the heart of the city at the office of Pacific Union International. In the past three years, they’ve sold more homes in La Cañada Flintridge than any other firm. Their company holds the record highest sale in the city. Pacific Union’s collective strength is just one reason why it’s the Ultimate California Real Estate Company and the #1 independent brokerage in Los Angeles and California. Its uniqueness is in the entrepreneurial nature of its real estate professionals in each of the communities it serves. That independent spirit allows these experts to come together and represent their clients unlike anyone else can. This video is the story of the La Cañada Flintridge office, its unique group of real estate professionals and what they bring to their clients.
World-class gardens
The city’s claims to fame include Descanso Gardens, a member-supported 501(c)(3) nonprofit organization internationally renowned for its botanical collections and spectacular seasonal horticultural displays. Originally part of a vast rancho deeded to Corporal Jose Maria Verdugo in 1784 by the first Spanish governor of California, the property was purchased in 1937 by newspaper owner E. Manchester Boddy, who managed it as a working ranch and filled it with varieties of camellias, roses and lilacs. Four years after he sold the property to Los Angeles County in 1953, local volunteers formed the Descanso Gardens Guild, Inc. The Guild now manages all garden operations in a public/private partnership with the County. Highlights include North America’s largest camellia collection; Japanese and rose gardens; a magnificent oak forest; and an edible garden planted with fruit trees, seasonal vegetables, herbs, edible flowers and more. Recent additions have included Oak Woodland, which recreates the pre-European oaks-and-meadows habitat of the LA Basin, and the Ancient Forest, a collection of cycads and other ancient “living fossil” plants. Other attractions include tours of Boddy’s original 1938 mansion, an art gallery in the home’s garage, a charming gift shop, a 1/8-gauge Enchanted Railroad, plus Café Descanso and the highly acclaimed Maple Restaurant, operated by Chef Joachim Splichal’s Patina Restaurant Group.

Sights set on the stars
La Cañada Flintridge is also the site of the Jet Propulsion Laboratory, the primary US research and development center for the robotic exploration of the solar system. The federally funded facility is owned by the National Aeronautics and Space Administration (NASA) and managed by the nearby California Institute of Technology (Caltech). In addition to constructing and operating planetary robotic spacecraft, JPL also conducts Earth-orbit and astronomy missions and operates NASA’s Deep Space Network of US spacecraft communication facilities. Major active projects here include the Mars Science Laboratory mission (including the Curiosity rover), the Mars Exploration Rover Opportunity, and the Mars Reconnaissance Orbiter. JPL’s Space Flight Operations Facility and Twenty-Five-Foot Space Simulator are National Historic Landmarks.