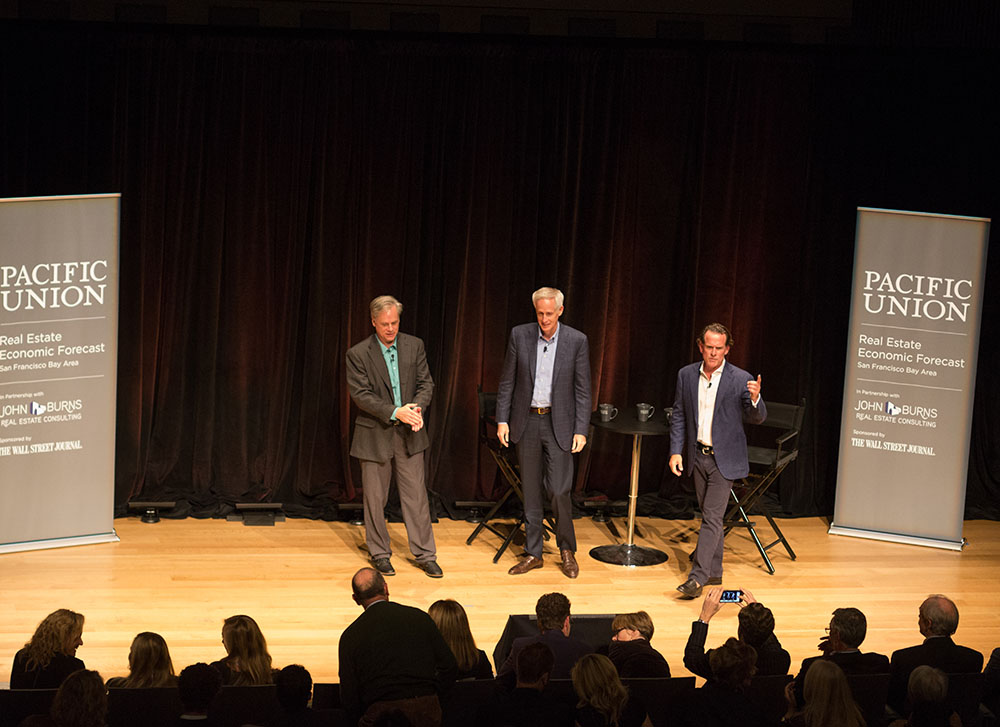 Home price growth should normalize throughout the Bay Area over the next three years, although demand is likely to remain high based on our region’s economic strength.

Those were two of the main takeaways from Pacific Union’s real estate and economic forecast for 2018, which was again presented in partnership with the esteemed research firm John Burns Real Estate Consulting. In an hour-long presentation on Wednesday, Nov. 18, at the SFJAZZ Center in San Francisco, Pacific Union CEO Mark A. McLaughlin, JBREC CEO John Burns, and JBREC Senior Vice President Dean Wehrli combined their insights to offer a look into real estate and economic activity through 2018.

Over the next three years, JBREC expects that home value appreciation will moderate to about one-third of its 2014-2015 rate. Between 2016 and 2018, average growth will slow to an aggregate of about 8 to 10 percent in the aforementioned counties, although McLaughlin stressed that the stabilizing price appreciation is not a cause for alarm.

“What you heard today is [about] normalization,” he said in the presentation’s concluding remarks. “The market isn’t crashing — it’s just going to slow down a bit. We will still benefit from modest annual appreciation, but double-digit appreciation will take three years in most of our markets.”

As a further example of normalization, McLaughlin pointed to the Nov. 19 IPO by San Francisco-based payment-processing company Square, which was valued at $6 billion less than a year ago. The company ended its first day trading on the New York Stock Exchange at $13.07 per share, giving it a market capitalization of $4.22 billion.

In 2014, venture-capital firms pumped $25.3 billion into Bay Area companies, the most since the height of the dot-com era in 2000. This aggressive funding activity has spawned a host of so-called “unicorns” — companies valued in excess of $1 billion. The panelists believe that some of these firms may not meet their lofty valuations, which could slow job growth over the next three years, particularly in the tech-dependent Silicon Valley.

Still, the Bay Area remains a global economic powerhouse, with local job markets growing much faster than new household creations and fueling income growth. JBREC says that job growth is outstripping new household growth by more than 5 to 1 in the San Jose metropolitan area; 4 to 1 in San Francisco (including Marin and San Mateo counties); and 3 to 1 in the Wine Country. In Alameda and Contra Costa counties, employment is growing at about half a percentage point faster than new households.

The full presentation contains in-depth information on generational trends and social shifts affecting the housing market, as well as statistics on Bay Area home sales for each region. You can view a webcast of the presentation here.