Residents of San Francisco’s Inner Sunset could credibly claim to enjoy the best of both worlds. Not only do they live within walking distance from a strip of broad-ranging restaurants and shops, they can also practically claim Golden Gate Park – one of the city’s crown jewels – as their own backyard. 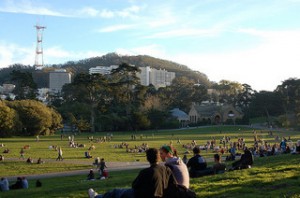 Situated just west of the Haight-Ashbury and Cole Valley neighborhoods and about three miles east of the Pacific Ocean, the Inner Sunset is far enough away from downtown that you might forget you’re still in San Francisco.

Still, commuting via public transportation is as easy as it is in most other parts of the city, largely due to the N-Judah light rail train, which makes nearly 10 stops in the neighborhood. Several bus lines – including the 71-Haight and 6-Parnassus – also offer access to downtown areas.

Locals consider the corner of 9th Avenue and Irving Street the Inner Sunset’s epicenter, and both streets are lined with a multitude of local dining and shopping options. Within just a few blocks’ walk, foodies can choose from sushi at Ebisu, comfort food at Park Chow, freshly baked pizza at Arizmendi Bakery, or Siamese cuisine at Marnee Thai. Local stores sell everything from hardware to vintage clothing to magic supplies. Andronico’s Community Market is the neighborhood’s dedicated grocery store, and a farmers’ market sets up shop every Sunday year-round.

Those who partake in sports and outdoor activities will find a lot to like about the Inner Sunset, in spite of the frequent fog. The neighborhood’s location on the south side of Golden Gate Park means that runners, bikers, and hikers can indulge their passions without straying far from home.  Tennis courts, a fly-casting pond, soccer and baseball fields, and a golf course can all be found within the park’s boundaries.

The 1,000-acre urban oasis – which stretches all the way to Ocean Beach – also offers plenty of cultural and natural attractions and events. Golden Gate Park fixtures include the de Young Museum, the California Academy of Sciences, the San Francisco Botanical Garden, and the Conservatory of Flowers. And if that weren’t enough, the park hosts numerous music festivals throughout the year, including Outside Lands in August and Hardly Strictly Bluegrass in October.

“The Inner Sunset has it all, a great neighborhood vibe, plentiful restaurants and bars, cool shops and direct access to the most popular areas of Golden Gate Park,” user Ebeth wrote on Pacific Union’s Inner Sunset neighborhood reviews page.  “Thanks to the MUNI N Judah Line, The Inner Sunset is in close proximity to both Downtown and the Beach.”

Median sales prices for condos in the neighborhood have risen 38 percent from a year ago, climbing to $1.43 million in June 2013.