A report released this week confirms that home prices continue to rise at a steady pace across the Bay Area as well as nationwide, but a close look at the numbers also reveals much more: the extent of the housing market collapse five years ago and the strength of the recovery now under way.

The Case-Shiller index trails other home price reports by a month or more, but it remains closely watched as an accurate gauge of the housing market’s health, and its database has tracked price changes going back to 1987.

A BIG JUMP IN PRICES, AND A BIG FALL
From a base value of 100 set in January 2000, Case-Shiller’s 20-city composite index charged higher to a peak of 206.52 in July 2006, meaning the average sales price for a typical single-family home more than doubled – rising 107 percent — in just six and a half years.

After those record highs, prices in San Francisco and the rest of the United States dipped slightly over the next year before plunging at breakneck speed beginning in late 2007. Home prices didn’t stop falling for a year and a half.

San Francisco metro area prices reached their low in March 2009 with an index level of 117.71 – down 46 percent. Nationally, the 20-city composite didn’t fall quite as far, bottoming out a month later at 139.26, down 32.6 percent, and then slipping a few points lower three years later. 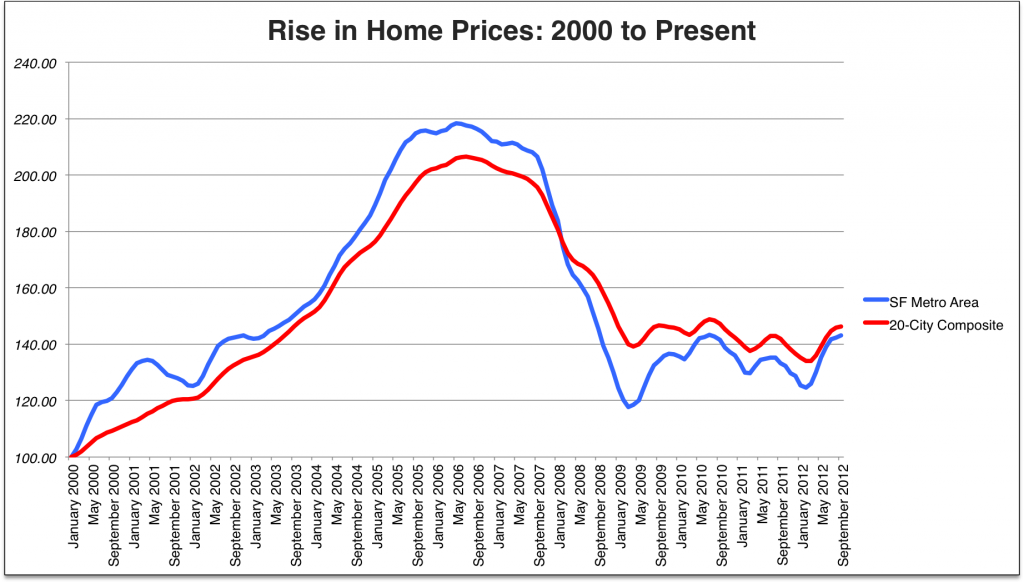 RECOVERY, FINALLY, IN 2012
Federal tax credits in 2010 fueled a burst of home sales, helping prices climb higher, but the recovery didn’t take hold until the first months of 2012.

The San Francisco home price index stood at 124.64 in February and has been rising ever since. The seven straight months of steadily rising home prices is the longest continuous run since 2005.

Nationally, Case-Shiller’s 20-city composite index reached its recession-era low of 134.07 in March and has been increasing since then. By September the index had arrived at 146.22, up 9.1 percent.

The San Francisco home price index reached 143.15 by September, with home prices up 21.6 percent since the low set in March 2009. Perhaps more significantly, prices have risen 14.8 percent since February and are forecast to continue increasing.

CLIMBING BACK
Because Case-Shiller only tracks metro areas, it’s difficult to identify which Bay Area real estate markets are realizing sale prices today at or near their peak 2006 levels. But the city and county of San Francisco may come closest.

San Francisco largely escaped the deep price slides that hit other regional markets, in part because of its solid economic footing and status as one of the nation’s premier destinations. Patrick Barber, president of Pacific Union International’s San Francisco region, said current prices in the city are very close to their peak levels — and in many cases have even set new highs.

But most other Bay Area counties aren’t there yet. It may take a year or two before home prices in Marin County reach new highs again, and another year or two after that in other regions. But as the Case-Shiller numbers make clear, housing markets are headed squarely in that direction once again.

(Photo of Bernal Heights courtesy of J.G. in S.F., via Flickr.)