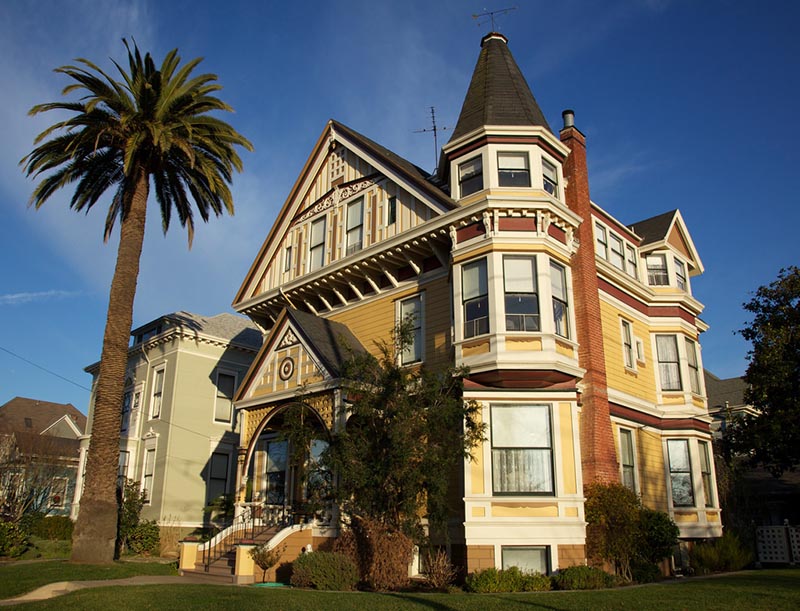 This is the second installment in a series of bimonthly posts about architecture styles, each dedicated to a popular home type that can be found in the Bay Area.

Ah, the beautiful, stately Victorian home. A Victorian home actually refers to a style born during the reign of Queen Victoria (1837–1901), though it transcends that exact time frame.

Victorians are often called “dollhouses” or “gingerbread houses.” Many Victorians are painted numerous colors, highlighting architectural artistic details in all of their glory. Some Victorian variations include the Queen Anne, the Second Empire, the Shingle- style, and the Stick-style.

Inside the home you’ll typically find smallish rooms and equally small closets if the structure has not been extensively remodeled. Ornate details such as wainscoting, picture rails, buttresses, and decorative ceilings are common features, and fireplaces are ubiquitous. Traditionally, the interior of a Victorian home was stuffed to the gills with furniture and covered in wallpaper.

At one time, there were approximately 50,000 Victorian homes in San Francisco, but it is said that nearly 75 percent of them were damaged during the 1906 earthquake and the fires that followed.

Without a doubt the most famous Victorian homes in the Bay Area are San Francisco’s Painted Ladies. This row of iconic, colorful homes adjacent to Alamo Square Park was featured in the beginning shots of the popular TV show “Full House,” and tourists from all over the world make it a point to stop and take photos of the homes. If you are interested in learning more about the Victorians of San Francisco, you can take a San Francisco Historical Walking Tour.

Another Bay Area Victorian of note is San Jose’s Winchester Mystery House, which was once the residence of Sarah Winchester, widow of gun magnate William Wirt Winchester. The home was in a constant state of construction from 1884 until Sarah Winchester’s death in 1922.

The house has 160 rooms and is filled with secret passageways and winding stairways, supposedly built to confuse ghosts and spirits. The Winchester Mystery House is now a California Historical Landmark and is listed on the National Register of Historic Places. It is open to the public, and tours are available.

In the East Bay, according to Alameda Magazine, “It’s said there are more Victorian-style homes in Alameda, based on our population, than anywhere else in the country.” And though that statement may or may not be factually correct, there are approximately 3,000 Victorian homes on the island city.

Living in a historic home isn’t for everyone. Of course, due to their age, Victorians need special care and attention. You can learn more about Victorian homes on the HGTV website. This Victorian Homes website has a wealth of content about this architecture style, including restoration information, decorating ideas, and a photo gallery. And this The Old House Guy article follows the restoration of a Victorian home in New Jersey, complete with before-and-after photos.

Interested in a Victorian home? Make sure to speak to your real estate professional about the features you deem important. Together, you can find your dream “dollhouse.”