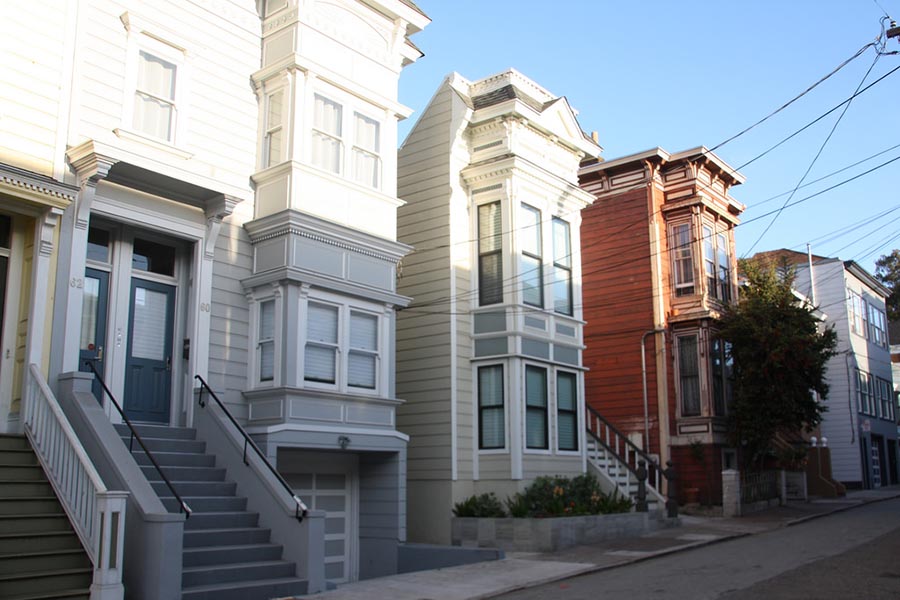 This is the sixth installment in a series of bimonthly posts about architecture styles, each dedicated to a popular home type that can be found in the Bay Area.

The Edwardian architectural style gained popularity in the early 1900s (approximately 1901-1914).  The style is named in correspondence with and in honor of the reign of King Edward VII of the United Kingdom, Queen Victoria’s son. The well-known and easily identifiable Victorian home actually refers to a style born during her reign (1837–1901).

The Edwardian-style home takes influences from Victorian, Art Nouveau, Georgian, and Arts and Crafts architecture. In fact, the popular Craftsman-style home was being built at nearly the same time (1905-1929) as the Edwardian.

What makes an Edwardian an Edwardian? For one, it relaxed the heavy, ornate style used in Victorian architecture. Edwardian homes brought back a simpler, classic look but still included external decorative touches to reflect wealth. Generally, Edwardian houses were painted lighter colors and featured less complex ornamental patterns, both inside and out. While the Victorian was filled to the brim with furniture and decorative elements, the Edwardian was all about less clutter. These homes were built at a time when gas and electricity were being introduced to dwellings, and this is reflected in the lighter, airy style.

Inside, the Edwardian was fresh and light, with floral patterns and pastel colors. Bamboo and wicker furniture was used, ceilings were tall, wallpaper was cheerful, and fireplaces were smaller. Stained glass was still prevalent, but woodwork was generally less elaborate.

According to the Bold Italic in its Guide to San Francisco Architecture, “Edwardian homes are highly concentrated in areas that were rebuilt after the fire, such as in the south of Market, downtown, and Mission neighborhoods.” And, according to a The Culture Trip article, “There are actually more Edwardian-style homes in San Francisco than the famed Victorians.” Again, this is due to the 1906 earthquake and fire that destroyed so many homes in the city.

Is it a Victorian or an Edwardian? SFGate helps break down the difference in styles in this blog post. And this Know Your Architectural Styles article from Curbed SF links to a great visual timeline.

If you are a house hunter looking to purchase an Edwardian-style home, we wish you luck on your royal chase. If you are currently living in an Edwardian, congratulations on your classic — and classy — residence.