Our friends at 1000Watt recently took a comparative look at the Q4 earnings reports of real estate portals Zillow, Trulia, and Move Inc. 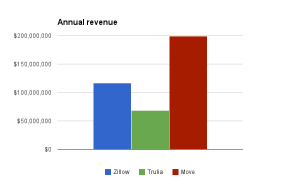 However, revenue growth gives the edge to Zillow and Trulia, with Move languishing far in third place.

Where’s the cash coming from? According to post author Joel Burslem:

“Zillow and Trulia now make the bulk of their revenue from services (leads and/or software sales to agents) rather than display advertising. This is a big change from when they launched several years ago.”

“Also surprising, to me at least, were the average monthly revenue numbers per subscriber that each portal reported. Zillow’s number, for example – $267 a month – is a pretty decent chunk of change. How many brokers can claim to get that out of their agents on a monthly basis?”

Indeed. We still find it dismaying that these listing aggregators are selling real estate professionals the right to market against, and receive leads from, their own listings – rather than monetizing the audience for those listings, the potential buyers.

And they’re selling to a finite market – the 250,000 real estate professionals that Burslem defines in his post as potential paying customers. What happens when that supply runs out? The only option to boost their revenue at that point will be … to charge more.

In addition, $267 a month isn’t chump change for many real estate professionals. What happens when it goes to $300 or $500? Will many current subscribers then find themselves priced out of getting leads from their own listings?

Just something to think about.