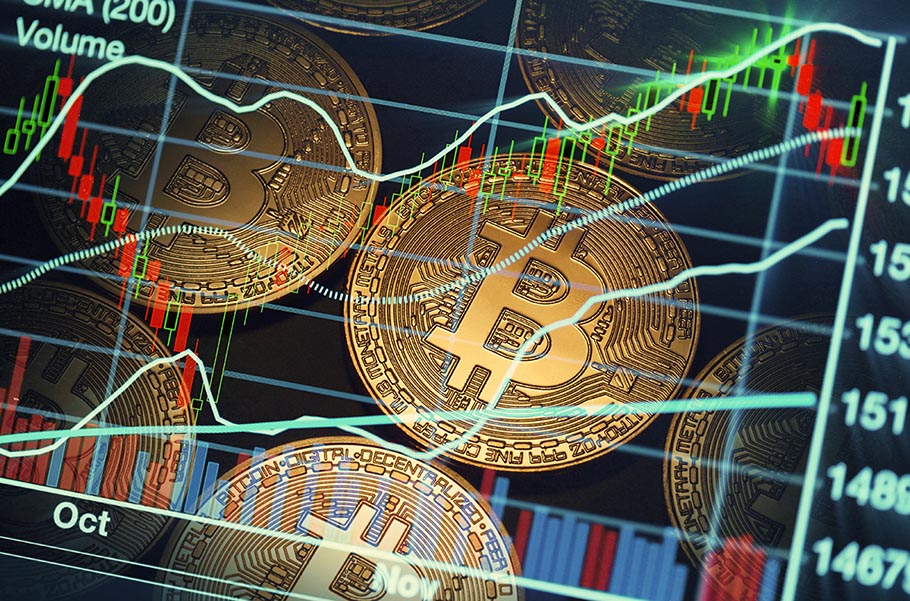 Despite the rise of cryptocurrencies, and particularly the hype around Bitcoin, a general understanding of what it is and why its value has increased tremendously over the last few months remains opaque. The following analysis attempts to provide some basic information about cryptocurrencies, with an emphasis on Bitcoin, and the technology that allows the proliferation of cryptocurrencies, which is called blockchain. Lastly, we address how Bitcoin may affect the U.S. real estate market.

When discussing the recent hype around cryptocurrencies, it is critical to understand that while blockchain technology enabled rise of them, speculative market euphoria can be viewed with skepticism. Part of the financial-market hype is driven by the future value of promising innovations stemming from blockchain technology, not necessarily from the future value of Bitcoin or some other cryptocurrencies that have gained interest such as Ethereum and Litecoin.

Cryptocurrencies such as Bitcoin are most frequently defined as “a peer-to-peer, decentralized, digital currency whose implementation relies on the principles of cryptography to validate the transactions and generation of the currency itself.” Peer-to-peer and decentralization are intended to ensure that exchanges do not require a third party such as a bank and are not governed by any bodies such as a treasury department, a central bank, or a country.

The role of cryptography is to guarantee the security of the transaction and to generate new Bitcoins. New Bitcoins are created through a process called mining, in which computers solve complicated mathematical problems. Once a problem is solved, a new Bitcoin is generated and is assigned a digital signature that guarantees its authenticity and uniqueness. The solution or key goes into the blockchain, an electronic distributed ledger, which cannot be faked since each new key must be confirmed by other independent miners. The validation ensures that there is no fraud and double-spending. Every Bitcoin includes a blockchain, an anonymous digital record of the unit’s transaction history.

However, as more and more people mine Bitcoins, the cryptographic codes get longer and more complicated. Hence, the growing popularity of cryptocurrencies and trading has led to controversies around their environmental impacts. Mining requires enormous amounts of computing power and energy; Bitcoin’s computing network has grown at an 1,100 percent average annual pace over the last five years. At the current growth rate, Bitcoin would use more electricity than the entire world uses today by 2020. Since most of this mining goes on in China, where energy is mostly derived from coal, the environmental implications could be disastrous. Furthermore, as the number of Bitcoins in circulation approaches its limit of 21 million, minting algorithms are increasingly more difficult and demand greater energy sources.

Energy demand is one of the biggest pitfalls of Bitcoin and the reason that some other cryptocurrencies are gaining momentum. The appeal of Ethereum, for example, is that it differs from Bitcoin in the way new coins are created, which requires less computing resources by giving mining power proportional to the number of coins already held by a miner. With Bitcoin, the first miner to solve a block transaction problem gets a coin. While Ethereum’s mining process may lead to distributional inequality issues since those who own more can theoretically mine more, the proliferation of cryptocurrencies illustrates the desire to overcome constraints with existing methods: scalability, interoperability, and governance issues. Since Bitcoin governance is decided primarily by miners and the core development team, greater adoption as a store of value in the traditional finance structure may hinge on some clarification from regulators such as the U.S. Securities and Exchange Commission.

Japan is a leader when comes to cryptocurrencies, a reflection of its deep history with Bitcoin. The technology was supposedly invented by a Japanese person or group of people called Satoshi Nakamoto, though the inventor’s identity remains a mystery. Nevertheless, in 2017, the Japanese government passed an act legally clarifying Bitcoin as an asset that can be used as a method of payment, though it has not yet declared it a legal currency. The Japan Financial Services Authority was granted the ability to regulate and license virtual-currency exchanges in Japan. This was especially important, as it established an official Bitcoin market in Japan, where the rules are clear and consumers can be protected. This in part helped increase demand for Bitcoin and other virtual currencies. Japanese yen still represents 50 percent of national currencies that are traded for Bitcoins.

Nevertheless, the question remains whether Bitcoin is money or an asset. The classic economist’s definition holds that there are three functions of money: a medium of exchange, a store of value, and a unit of account. And while all three measures have already been prescribed to Bitcoin, cryptocurrency still has many obstacles to overcome to ensure its viability and longevity. As a store of value, Bitcoin still makes a difficult case, since its daily average variation in value is more than 4 percent. By comparison, while the U.S. dollar’s value also varies, the average daily variance is only 0.3 percent, and the largest-ever one-day change in the dollar was less than 2 percent.

Despite its wide variation in value, Bitcoin has gained popularity as medium of exchange in countries where local currencies are even more volatile or where a lack of conventional banking services and stability create a productive market for Bitcoin. South Africa, for example, has seen a surge in Bitcoin trading. It would be remiss not to mention that Bitcoin has long been popular as a money-laundering and terrorism-financing mechanism and a way to circumvent reliance on the U.S. dollar and involvement of banks that are required to report transactions.

Potential Impacts on the Housing Market

Going forward, it appears that Bitcoin or some other cryptocurrency will increase its function as a medium of exchange. In 2017, companies started accepting Bitcoins for payments, and more are expected to do so in 2018. Also, the further explosion of cryptocurrencies is very likely, as blockchain technology permeates a greater number of industries and finds more applications. Blockchain has the potential to be quite disruptive in real estate services, with the biggest impact on providers of title insurance. In some countries, the technology has already been employed for land-titling registry.

Nevertheless, the use of Bitcoins as a currency in real estate transactions still has many obstacles. First, the IRS does not view Bitcoins as currency. Instead, they are treated as property and are subject to capital-gains taxes. Thus, when someone purchases something with Bitcoins, the IRS views the transaction as selling Bitcoins to obtain dollars, and when property is sold (Bitcoins in this case), it must be reported on a tax return. Also, if the value of Bitcoins changed from the time a user obtained them to the time they “sold” them, they must pay a capital-gains tax. Furthermore, the recently passed tax-reform package limited exemption of 1031 exchanges to “real property” only. Thus all “property” transactions — including digital currency exchanges for other currencies, dollars, or physical goods — are now taxable events. This could be one of the bigger issues holding back the mainstream appeal of Bitcoin going forward.

Furthermore, given Bitcoin’s volatility as a store of value, real estate service providers such as escrow businesses and lenders are still reluctant to accept it for home transactions, especially since typical closings take around 30 days, a period in which Bitcoins’ value can vary greatly. There have been some accounts of real estate transactions conducted with Bitcoins, but it appears that the Bitcoins were exchanged to dollars then back to Bitcoins after the sale. Thus, the transactions were not really financed in cryptocurrency. Also, in accounts of individuals who chose to accept Bitcoins as an all-cash transaction, the motivation was solely driven by the desire to own Bitcoins. Real estate brokers that engaged in transactions with Bitcoins charged a premium to cover the extra costs of ensuring that all parties and exchanges accounted for the currency volatility.

In closing, here is an image captured in Los Angeles recently. For many, it may resemble the moment during the 2008 housing market peak when everyone was claiming a stake in real estate, even though many shouldn’t have.