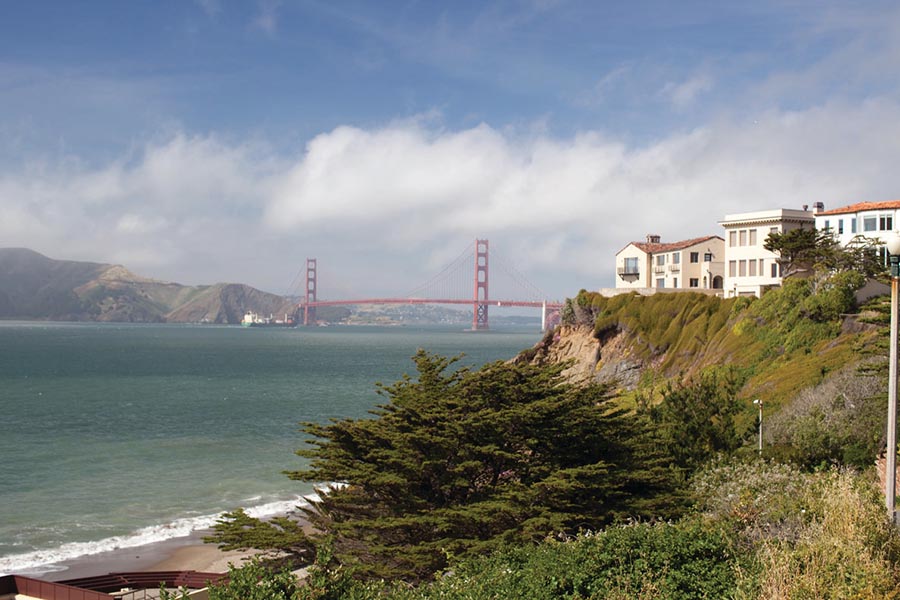 VIEWS OF SAN FRANCISCO’S ICONIC BRIDGE COMMAND BIG PREMIUMS
San Francisco is a city with no shortage of stellar views, and the Golden Gate Bridge is hands down one of the best. So it should come as no real surprise that homebuyers who want vistas of the world-famous span should be prepared to dig deep.

A recent realtor.com feature says that the current median list price for homes with views of the Golden Gate Bridge is $2,450,000, 33.1 percent higher than those in the same neighborhoods that lack vistas. Homes with full views of the international orange-painted landmark, which will celebrate its 80th birthday later this month, are rare, with only a few hundred in existence. Pacific Union San Francisco real estate professional Nina Hatvany told realtor.com that many homeowners remodel their properties to place the living room on the third floor so they can take full advantage of the bridge panoramas.

“It’s what makes San Francisco special,” Hatvany said. “If you have a glorious view of the water, the bridge, and Alcatraz, then you know you’re in San Francisco.”

While views of the Golden Gate Bridge don’t come cheap, views of other U.S. landmarks command even higher premiums. A full South Beach view in Miami Beach nets a 103 percent premium, while Las Vegas homebuyers who seeks views of The Strip will pay 210 percent more.

AGAIN, BAY AREA HOMEOWNERS ARE THE NATION’S MOST EQUITY-RICH
The past few years of vigorous home price appreciation have helped make Californians among the country’s most equity-rich, with Bay Area cities still at the top of the heap.

ATTOM Data Solutions’ latest U.S. Home Equity & Underwater Report says that there were about 13.7 million equity-rich homeowners in the first quarter, defined as those who have a loan-to-value ratio of 50 percent or less. That represents 24.3 percent of all properties, down slightly from the fourth quarter but up from the first quarter of 2016.

CALIFORNIANS’ BIGGEST FINANCIAL-PRODUCT COMPLAINT: THE MORTGAGE
When the Consumer Financial Protection Bureau gets a call from a California area code, it’s most likely about a mortgage, though incorrect credit-report information is also an issue.

That’s according to an analysis by SmartAsset, which says that California is one of 19 U.S. states with the most complaints about mortgage products. States with the most mortgage complaints were geographically concentrated, mainly in the Northeast and on the West Coast. Forty-one percent of mortgage-product complaints involved the act of making payments, while 39 percent cited the inability to afford the loan.

In terms of general financial complaints, Californians — and residents of the vast majority of other states — said that there was incorrect information on their credit reports. SmartAsset notes that fixing bad credit-report data can be time consuming and suggests starting the process via traditional mail rather than online.

BAD CREDIT IS BAD NEWS WHEN IT COMES TO HOMEOWNERS’ INSURANCE
Speaking of the importance of credit-report accuracy: Less-than-stellar credit not only makes it harder to get a mortgage, but it also means much higher insurance premiums for most U.S. homebuyers.

While poor credit will affect homeowners’ insurance costs for the vast majority of Americans, Californians needn’t add this worry to their lists. The state, along with Maryland and Massachusetts, is one of three that prohibits the use of credit data when structuring home- insurance rates.