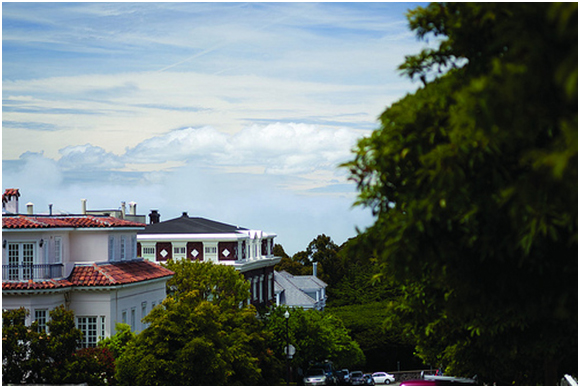 With the 1,491-acre Presidio as your backyard, Presidio Heights is like no other San Francisco neighborhood. This residential enclave with its awe-inspiring views could today easily be described with the word “levantar,” which in Spanish means to lift or raise up. It’s also the name of the Presidio Archaeology Program, an initiative focused on preserving and protecting the park’s underground treasures that many in the Presidio Heights neighborhood support.

Your expansive “yard” was established along the base of the Golden Gate by Spain in 1776. At that time, el Presidio served as a defensive check against Russian expansion into North America (many today don’t realize that a Russian fort was located just 60 miles to the north). In 1996, Congress developed an unprecedented management and funding model for a national park when it created the Presidio Trust. The goal was to preserve the Presidio’s natural, scenic, cultural, and recreational resources, while also becoming financially self-sufficient through various business and community efforts.

The restaurants and shops in the neighborhood are true gems. Dotting nearby Sacramento Street, you’ll find Garibaldi’s, Osteria Cucina Ristorante, and Spruce—all stand-out San Francisco restaurants. Lunch or dinner at Garibaldi’s—in the neighborhood for 20+ years—is always a treat. (Some locals even refer to it as their “second home.”) For a memorable Italian meal, Osteria is the place. Spruce is a favorite for Contemporary American cuisine—always perfectly prepared with flair.

Back on the Presidio proper, The Presidio Social Club features Chef Ray Tang’s unique take on California comfort cuisine. With locally sourced ingredients, his seasonal menu has a range of tasty selections. It’s a great spot for two—or twenty—for brunch before you head for a walk to the base of the Golden Gate. Down the road La Terrace’s Executive Chef, Pierre “Titou” Palomes, has helped make the Presidio’s Main Post a gathering spot for casual meals and business get togethers for five-plus years, including 50 coveted patio seats for when the fog is out and the sun is shining bright.

Homes for sale in Presidio Heights.

Discover more about Presidio Heights—including top schools in the area.

Bordered by Pacific Avenue and the Presidio to the north, Arguello Boulevard to the west, California Street to the south and Presidio Avenue to the east.