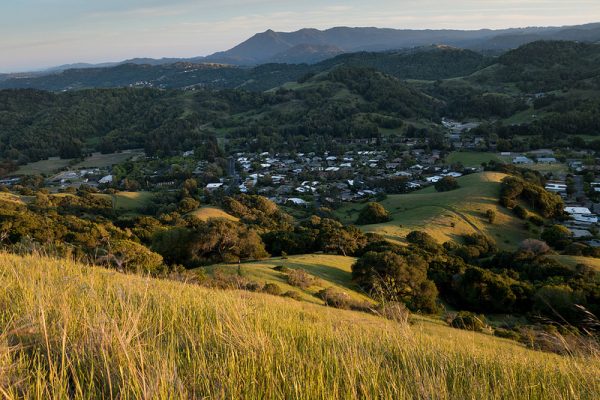 The Lucas Valley region is perhaps best known as the home of entertainment titan Lucasfilm’s Skywalker Ranch campus, which is situated on a secluded parcel of land off Lucas Valley Road near the community of Nicasio. Though founder and “Star Wars” creator George Lucas has been buying land in the region for decades, the road is actually named for an early Marin County settler.

Lucas Valley is a development of about 540 homes located just north of the San Rafael city limit, two miles west of Highway 101 and 25 miles north of San Francisco. Along with the neighboring community of Marinwood, Lucas Valley was built in the middle of the 20th century by noted California real estate developer Joseph Eichler. Often cited as a prime example of midcentury modern architecture, Eichler’s distinctively styled, single-story suburban homes continue to enjoy popularity with Golden State homebuyers. Eichler’s firm built nearly 11,000 homes in his career — the vast majority of them in the Bay Area — and specified the omission of utility poles and streetlights when developing Lucas Valley.

Lucas Valley is governed by a homeowners’ association, which currently charges yearly dues of $640 and includes access to the community center, also built by Eichler. The community center has tennis courts and a swimming pool and operates a professionally coached youth swim team that competes with nine other teams throughout Marin County.

Families have plenty of was to enjoy the area’s natural splendor, as Lucas Valley is surrounded by acres of open space. Local outdoor-recreation areas include Terra Linda/Sleepy Hollow Divide, Lucas Valley Preserve, and Ignacio Valley Preserve, which provide miles of hiking, biking, and horse trails and permit owners to bring dogs. To the west, Lucas Valley Road leads to Nicasio Reservoir, Point Reyes National Seashore, and the rugged coastline along Highway 1.

Neighborhood children attend public schools operated by the Dixie School District, including Dixie Elementary School, which scored a 942 of a possible 1,000 on the 2013 California Academic Performance Index, and Miller Creek Middle School, which notched a 911. The Marin Waldorf School, also located in the neighborhood, is a private institution for preschool- through middle school-aged children.

Marinwood Shopping Center, which houses a grocery store and a Saturday farmers’ market, is the closest place to buy necessities. Larger chain stores and restaurants can be found in shopping centers in San Rafael’s Terra Linda neighborhood, about five miles south on Highway 101.

According to MLS data, the median sales price for a single-family home in the 94903 ZIP code — which includes Lucas Valley, Marinwood, and parts of northern San Rafael – was $940,000 in the second quarter, a gain of 13.7 percent from the second quarter of 2014. Sellers took in an average of 4 percent more than original price, the largest premiums in the past three years.