Bay Area residents are rightfully proud of San Francisco’s standing as a world-class destination. Still, it was impressive to see how the City by the Bay compares with other leading cities around the globe in a new luxury home sales report from Christie’s International Real Estate.

We gave a quick overview of the report on Thursday, just after its release, but a deeper look at the statistics cited in the Christie’s analysis shows a local real estate market thriving despite economic headwinds — and setting records when other segments are just starting to recover.

INTERNATIONAL ACTIVITY
The report found that strong demand from international buyers is fueling much of the growth in many of the world’s top destinations.

High-net-worth individuals (HNWIs) “find the world to be a small place, and geographical distances between cities are not relevant to purchasing patterns, which are more similar to each other in the 10 cities surveyed than other cities within the same country,” the report said.

In San Francisco, 40 percent of all $1-milion-plus home sales went to non-local and international buyers in 2012, the fourth-highest percentage among the 10 cities surveyed.

But local events and entrepreneurs also influenced the luxury market.

Pacific Union CEO Mark McLaughlin noted in the report that a scarcity of high-end supply and newly-acquired wealth from tech-firm IPOs and acquisitions also competed for a limited supply of high-end homes.

“Although the Facebook IPO was not a great success, the liquidity that it brought into the Bay Area was phenomenal,” McLaughlin said. “Many of these tech entrepreneurs chose to invest in real estate in 2012. This escalating demand drove units sold and sales volume to historical heights.”

The Christie’s report also introduced a new gauge, the Christie’s International Real Estate Index, the first of its kind to rank the top luxury markets across metrics such as record sales price, prices per square foot, percentage of non-local and international purchasers, and the number of luxury listings relative to population.

Summarizing the many data points in the Christie’s report, the index ranks San Francisco seventh among the world’s top 10 real estate markets, behind London, New York, Cote d’Azur, Hong Kong, Paris, and Los Angeles, and ahead of Miami, Toronto, and Dallas. 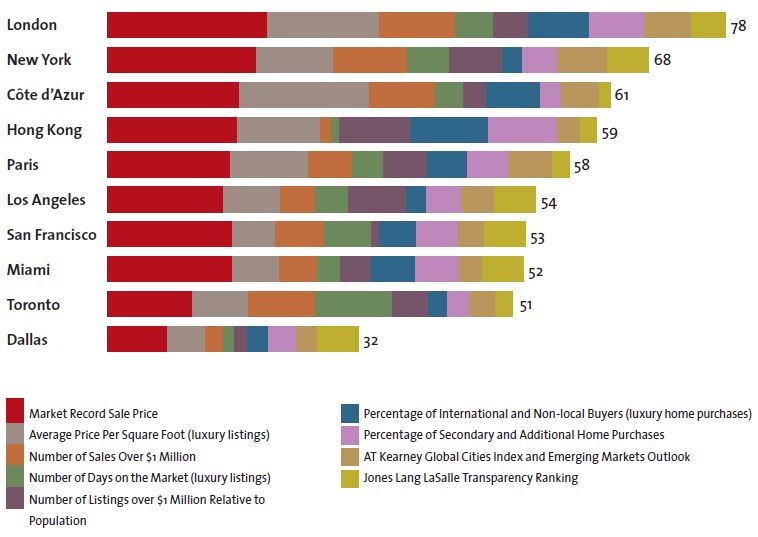 LOOKING AHEAD
The Christie’s report cautioned that tax-law changes in many global markets may dampen high-end market activity in 2013. But McLaughlin is predicting a strong year ahead for Bay Area high-end real estate.

“In San Francisco, everything is pointing to a strong year in 2013,” he said in the report. “Demand is continuing to exceed supply, which could push prices higher, and that will encourage more home owners to put their property on the market. You can be sure that the buyers will be waiting.”