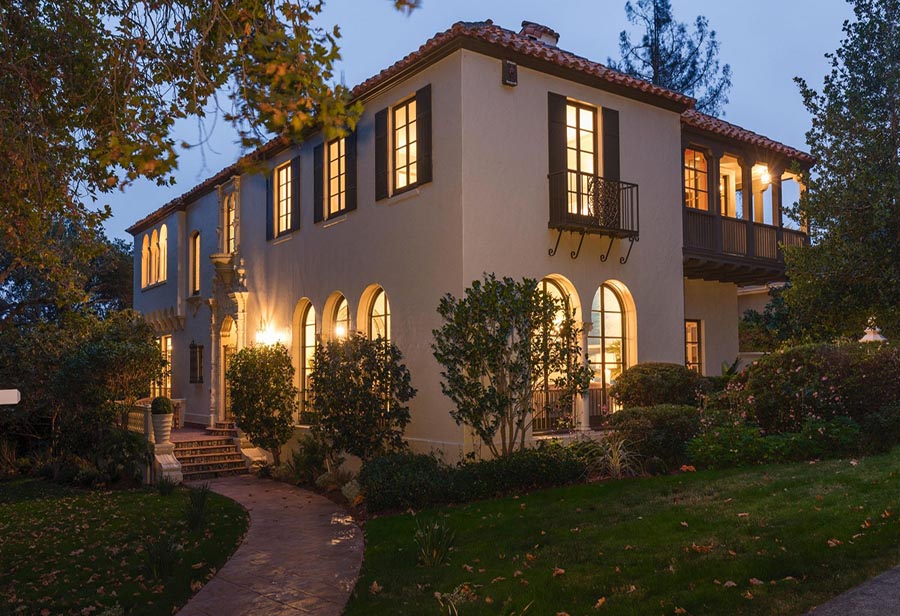 In the 1920s, when this stately Spanish Colonial Revival masterpiece was born, Piedmont boasted that it had more millionaires per square mile than any other city in the country. Today, the expansive, light-filled layout and beautiful scale of 227 Crocker Ave. reflect the easy grandeur of California’s Golden Age at its livable best.

A curving walkway leads to a filigreed iron gate that guards the home’s ornate, white stucco entry, accented by a colorful, tile-inlaid landing. Inside, the entry hall features an ornately coffered ceiling, a lavishly tiled doorway, and a curved hardwood staircase — all of which sets the stage for the rooms beyond.

Just beyond the living room with its surrounding arched windows lies a brilliant sitting room/sunroom with beamed ceilings. In the dining room, five French windows in a bow wall overlook the patio and grounds. Nearby, the sunny, updated kitchen opens to a dining deck.

The six-bedroom, five-plus-bathroom residence is enhanced by an array of balconies overlooking the grounds and the East Bay hills. One balcony wraps the entire rear corner of the second level.

Decades after its first “City of Millionaires” era, in 2007 Forbes magazine named Piedmont the “Best Place to Live” in the United States. With its top schools, stately homes, tree-lined streets, and close-knit community, it remains one of California’s most desirable cities. The timeless Piedmont treasure is offered at $3,995,000 by Anna Bahnson and Debi Fitzgerrell.