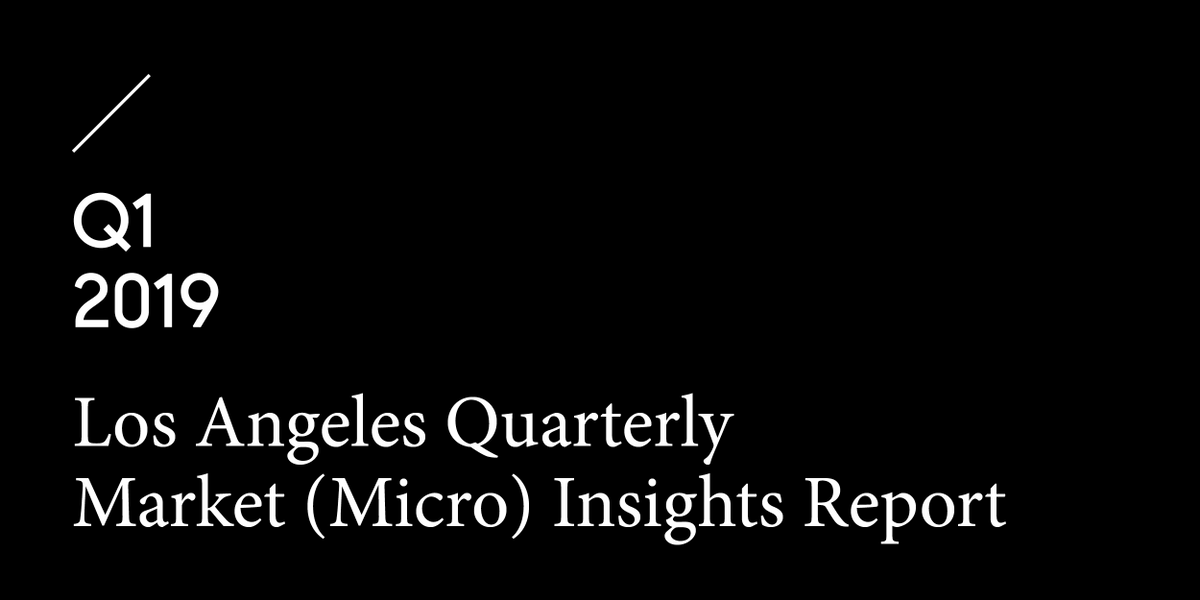 We are excited to announce the release of the Compass Q1 2019 Los Angeles Quarterly Market Insights Report. This report highlights the prevailing trends shaping the market for each neighborhood. The report is now live and ready to share with your clients and sphere. Click here to view the full write-up.

It is our pleasure to introduce the Compass 2019 Q1 Real Estate Market Report. Download the full report HERE.

Following many uncertainties in economic and housing outlooks across the regions, buyers in many  Los Angeles neighborhoods took a step back and entered the market with great trepidation, ready to step away at any signs of concern. As a result, home sales activity generally posted declines compared to the first quarter of 2018.

Buyers continued to look for value, however, and demand remained consistent in some sought after communities in Northeast L.A., Greater Pasadena and Mid L.A/Baldwin Hills communities. Buyers were not however in a rush and took longer to make  offers, extending the number of days on the market.

Buyers also benefited from more options of homes available for sale, though that was more likely to be the case in communities East of 405 than in  West Side communities. Nevertheless, buyer reluctance did lead to more price reductions and median prices rising generally slower than last year or showing some weakness compared to first quarter last year.

Overall, the quarter ended with more buyer enthusiasm than it started with, promising a solid spring home-buying season.

There were notably fewer homes sold in the first quarter compared to a year ago in the Hills, with the largest decline in Beverly Hills P.O. The P.O. area saw average single-family home prices pick up significantly, while they trended lower in the two other communities. Buyers were relatively quicker to purchase  single-family homes, while those buying condominiums took longer to shop around.

While the overall number of sales on the Westside declined compared to a year ago, the largest decline was among homes in Westwood – Century City, which also saw the largest decline in average single-family home prices. Home prices generally remained flat or declined compared to last year’s first quarter. Buyers also took longer to buy homes, extending the number of days on the market— except in West LA, where single-family homes also sold at the fastest rate.

While Culver City maintained a solid increase in sales of single-family homes, the remaining West Side South communities saw fewer sales compared to last year. Prices in all communities except Culver City  maintained a steady momentum, and some showed robust double-digit increases compared to a year ago. Buyers, however, took longer to shop around and decide, except for condominium purchases in Inglewood.

While the number of single-family homes on the market declined compared to last year, condominium sales were strong in all Metro Los Angeles communities except in Downtown L.A. – which was constrained by low inventory. Average home prices weakened compared to last year, except in Downtown L.A. and  condominiums in Hollywood. Buyers generally took longer to purchase, except for condominiums in Los Feliz.

There were fewer homes sold in the region compared to the first quarter last year, with the largest declines in Woodland Hills followed by Northridge and Tarzana, all of which saw 20 or more fewer single-family homes sold. Average home prices varied in some areas.  For example, single-family homes in Calabasas posted the largest decline, while Hidden Hills posted a notable increase. More consistently across the region, homes took longer to sell than during the same period last year.

The number of homes  sold in the first quarter mostly declined across this region, except in Toluca Lake where both single-family and condominium sales trended above last year. The change in average home prices was, on the other hand, a mixed picture, though single-family homes in Studio City and Toluca Lake enjoyed solid increases over last year. Homes generally took two weeks longer to sell.

The number of homes sold in the Pasadena area mostly trended below last year, except in South Pasadena where single-family sales increased. The average prices, however, didn’t hold up in South Pasadena while condominium prices jumped. Average home prices varied notably across the region, and buyers took about a week longer to purchase a home, except for condos in South Pasadena and Alhambra.

While home sales activity generally slowed in the La Canada Flintridge region, homes in Atwater remained in strong demand. Changes in average prices varied with relatively more expensive single-family homes in La Canada Flintridge lowering in average sales price compared to last year. Sellers of single-family homes in Atwater were quickest to receive an offer on their homes generally selling them in about 33 days, while sellers in the other areas waited relatively longer.

Home sales activity in Northeast Los Angeles generally slowed in the first quarter, except in Glassell Park where more homes were sold compared to last year. Average home price changes varied a lot across the region, though Mount Washington saw the most notable increase in average prices, up 16 percent. Changes in average days on market varied as well, though sellers in Eagle Rock, Glassell Park and Monterey Hills saw their homes snatched up quicker than last year.

Homes sales activity in East San Gabriel Valley were driven by affordability, with more affordable areas such as Azusa and condominiums in Monrovia gaining in sales activity while other areas experienced less activity compared to the first quarter last year. Average prices were a mixed picture with Arcadia and Sierra Madre posting declines among both single-family and condominiums while single-family homes in Azusa, Monrovia and Monterey Park posted solid gains.

Overall number of homes sold in South Bay fell compared to last year, while some areas saw an increase in homes sold. Palos Verdes Estate and Hawthorne saw a consistent decline among both single-family and condominiums,  yet average home prices trended up compared to the year before. Overall, average home prices increased the most in Hermosa Beach, Rolling Hills Estates and Palos Verdes Estates. Homes in Hawthorne sold at the quickest pace.