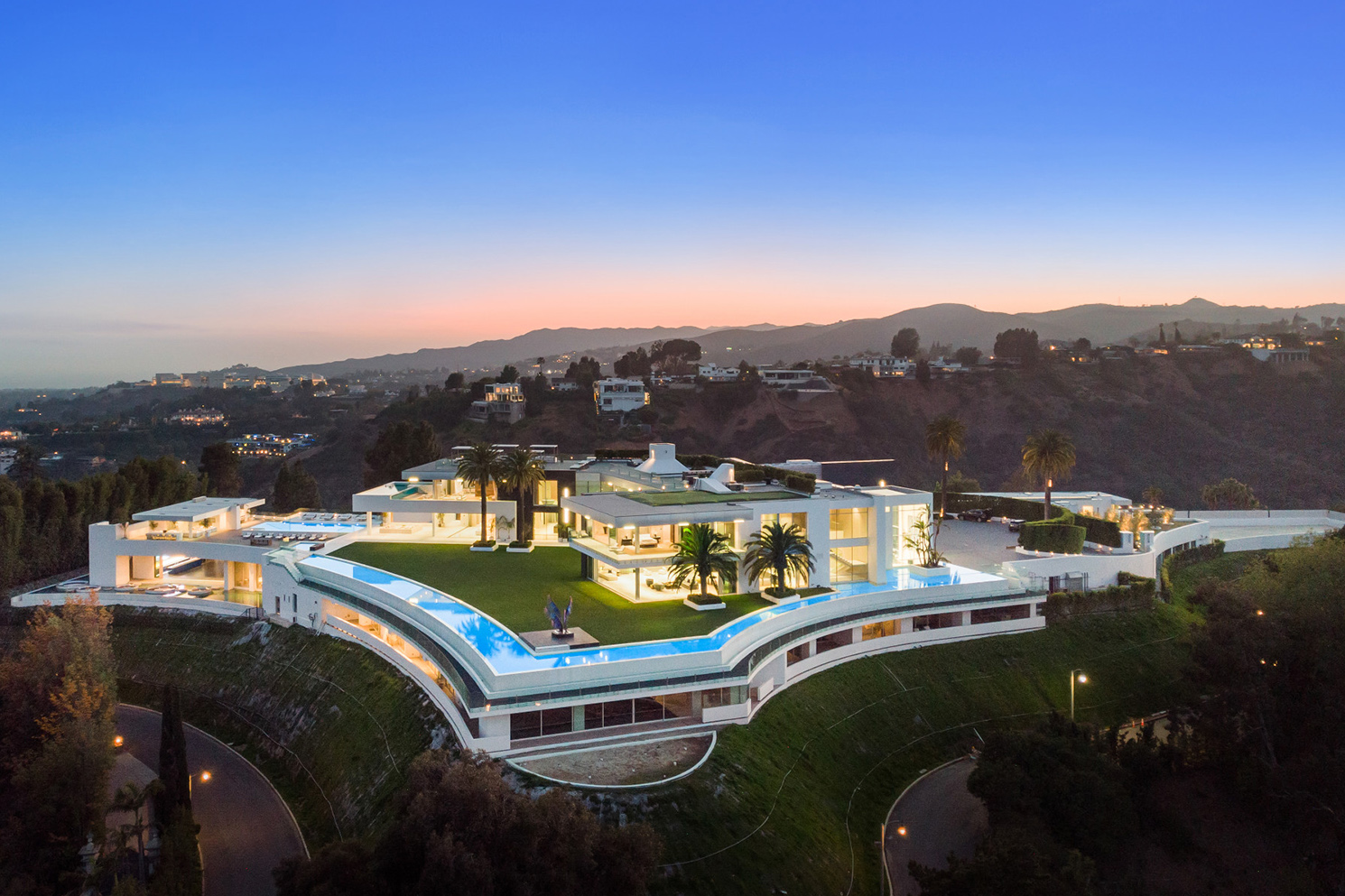 The 105,000-square-foot Bel Air estate set high above Los Angeles is represented by real estate agents Aaron Kirman of Compass and Branden and Rayni Williams of The Beverly Hills Estates and will be auctioned in February via Concierge Auctions.

An estate for the ages, The One is an oasis beyond compare perched high above of the City of Angels, where a luxurious lifestyle, popular culture, and seclusion reign supreme. Never before listed for sale, the property was listed on January 7th for $295 million. Multibillion-dollar producing international real estate agents Aaron Kirman of Aaron Kirman Group at Compass and Branden and Rayni Williams of Williams & Williams at The Beverly Hills Estates have teamed together to conduct the sale of The One and will work in cooperation with Concierge Auctions, who will manage the auction, all as retained entities from the Trustee in the sale of this once-in-a-lifetime gargantuan estate. Bidding in the No Reserve auction is scheduled to be held February 28th – March 3rd via Concierge Auctions’ online marketplace, allowing buyers to bid digitally from anywhere in the world.

“The One is created for today’s billionaire seeking a truly unrepeatable asset, and when it sells, it will be the most significant purchase in the world,” said Aaron Kirman, founder and president of the eponymously named Aaron Kirman Group and president of the International Estates Division at tech-leading real estate company, Compass. “While in 2021, digital properties like NFTs grabbed headlines for monumental one-of-kind sales, 2022 brings us back to the physical world with The One—a real estate property unmatched in size, scale, safety and triumphant design.”

The first and last of its kind, The One is elevated to maximize its 360-degree panoramic views of the Pacific Ocean, downtown Los Angeles, and the San Gabriel Mountains. The One is a work of art set on 3.8 acres appearing to float above the very city of Los Angeles itself. Ten years in the making, the estate is the largest and grandest house ever built in the urban world. A home of this magnitude will never again be built in Los Angeles, cementing The One in a class of its own. It also offers an unmatched opportunity to experience living on a scale beyond your wildest dreams. Surrounded on three sides with a shimmering moat of water, the property is spread over a jaw-dropping 105,000-square-feet. Five vast pools and incredible water features treat the senses indoors and out. Every imaginable amenity creates incomparable comfort and appeal: a massive nightclub, full-service beauty salon, wellness spa, 10,000-square-foot sky deck, 400-foot private outdoor running track with a glass-walled view of the city, and private Dolby Digital theater seating 40+ barely skim the list. Each room is meticulously decorated with a neutral palette that pays homage to the stunning landscape and keeps the entire estate cohesive despite its staggering scale, combining luxury with intimacy in the most meticulous manner.

Known as one of the most prestigious and desirable neighborhoods in the world, highly sought-after Bel Air, synonymous with wealth, luxury, and exclusivity, is famous for its star-studded residents, high standard of living, and spectacular homes. Enjoy all of the premium shopping, fine dining, and five-star amenities of the urban city without the hustle and bustle. Luscious greenery and stunning architecture throughout Bel Air’s winding roads create a true oasis under the sunny California sky. Together with nearby Holmby Hills, just 15 minutes away, and Beverly Hills, 20 minutes away, Bel Air completes the Platinum Triangle of idyllic and prosperous communities. Set at the foothills of the Santa Monica mountains, the dramatic snow-capped peaks are a welcome addition to the stunning landscape. Sunrises over the Pacific Ocean and unobstructed views of the entire Los Angeles Basin top the list of benefits to living in Bel Air. Head to Rodeo Drive for unrivaled shopping, while UCLA, downtown Los Angeles, and LAX are just a short drive away.

Aaron Kirman is President of the International Estates Division at Compass and founder, CEO and techpreneur of the eponymously named Aaron Kirman Group, which includes a team of nearly 100. With $9.2 billion in lifetime sales, Kirman represents the finest estates across the globe and is sought after by the most discerning clients, including titans of industry, celebrities, royal families, major lending institutions and foreign investors. A prominent figure in the luxury real estate market for the past 20 years, Kirman is known for selling homes priced at the hundred million dollars range and has received international acclaim for record-setting sales across Southern California, including selling the Danny Thomas Estate and the Eddie Goetz Estate. Kirman was ranked among the top five luxury real estate agents in the U.S. by the Wall Street Journal. The star of TV’s newest hit real estate show, Listing Impossible on CNBC, Kirman is regularly featured in publications like The New York Times, BBC, Forbes, CNN, The Los Angeles Times, Variety, the London Times, E! Entertainment and CBS. For more details, visit www.aaronkirman.com or on Instagram @aaronkirman.group.