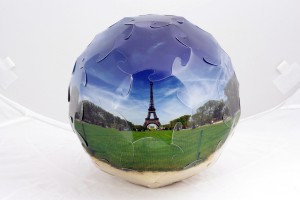 The Bay Area definitely caught World Cup fever in a major way this week. But even after the U.S. team’s disappointing loss to Belgium on Tuesday, some local fans still have a horse in the race.

In fact, apparently many San Franciscans are actually rooting for a different flavor of red, white, and blue: namely, France.

That’s according to a Redfin analysis of which U.S. cities boast a large proportion of residents from foreign countries with teams playing in the World Cup.

The report found that 8,143 San Franciscans hail from the birthplace of the éclair and Charles de Gaulle. Meanwhile, a whopping 156,829 Miamians were born in Colombia, and 4,277 residents of Killeen, Texas come from Germany.

And since Germany will face off against France this Friday, we suggest you grab a café crème (or perhaps, a café Americain?), tune in, and embrace your inner Francophile.