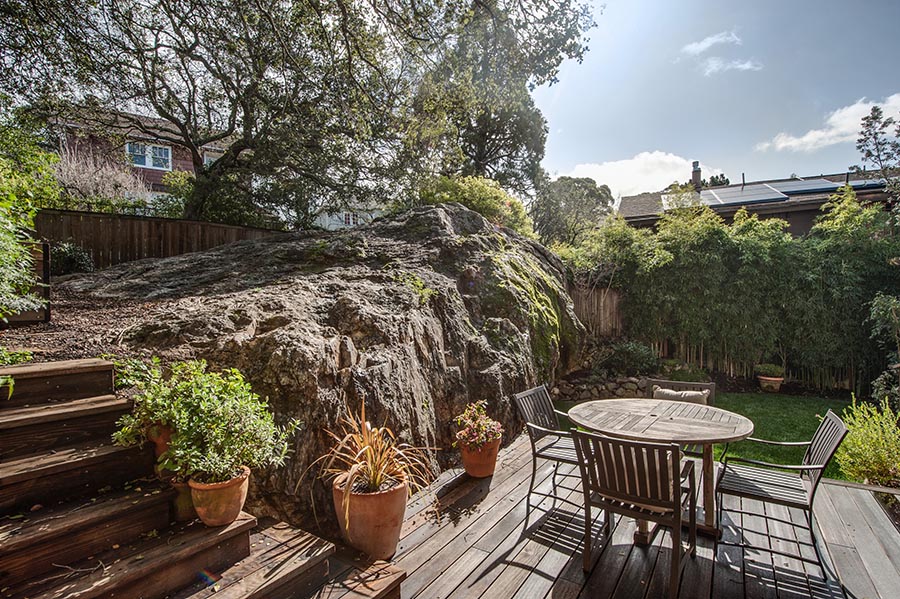 Schools, a nearby thriving commercial strip, and attractive homes all make Berkeley’s Thousand Oaks a popular place to settle down, and its geology lends the neighborhood a unique, rugged appearance. But as in other sought-after East Bay enclaves, home shoppers should be prepared for plenty of competition.

Thousand Oaks lies at the base of the Berkeley Hills in the northeastern part of the city, flanked by the community of Kensington to the north and the small city of Albany to the west. Downtown Berkeley and the University of California, Berkeley, are a 15-minute drive away. San Francisco commuters can hop on BART at the El Cerrito Plaza station a few miles to the east. AC Transit bus line H, which runs down Arlington Avenue, also offers weekday service to the city.

Bustling, lively Solano Avenue lines the southern edge of the neighborhood and provides locals with a diverse array of shops, cafes, and restaurants, including Bay Area favorites Barney’s Gourmet Hamburgers and Zachary’s Pizza. The Solano Stroll, which takes place each September, is a mile-long block party with music, dancing, food stands, community organizations, and its own parade.

Solano Avenue is also home to a Safeway and an Andronico’s Market grocery store. Every Sunday, the nearby Kensington Farmers Market serves the community with fresh fruits and vegetables and other edible goodies.

Well-regarded Thousand Oaks Elementary is a draw for parents with young children. On Halloween, the elementary school features the University of California marching band in a parade on Solano Avenue.

Unique to Thousand Oaks and neighboring Northbrae are the numerous rock outcroppings like the one in nearby Great Stoneface Park, which offers novice climbers a place to hone their skills. Some neighborhood homes are even built directly on the rock formations or have portions of them jutting into their yards.

The book “Berkeley Rocks: Building with Nature” guides readers though the history of the use of rocks in Berkeley architecture and features photographs of homes in the area. The Berkeley Architectural Heritage Association has published a booklet entitled “Among the Rocks: Homes and Gardens in Thousand Oaks.” Additionally, this website provides more information about the neighborhood, along with a variety of photos.

Thousand Oaks is almost an exclusively residential enclave, mostly consisting of single-family houses built in the early 20th century. Craftsman-style homes and bungalows from the 1920s and ’30s are common, and some at higher elevations offer views of the bay and the Golden Gate Bridge.

As in other Berkeley neighborhoods — and the East Bay in general — demand for homes in the neighborhood is intense, inventory is slim, and bidding wars are common. According to MLS data from area 2302, which includes Thousand Oaks, homes sold for an average of 124.5 percent of original prices in April. The median sales price was $1.38 million, up 23 percent from April 2015.

Demand means that Thousand Oaks homes don’t stay on the market long before finding an eager buyer. In February and March, homes in the aforementioned MLS area sold in an average of 12 days, and in April, that dropped to 11.