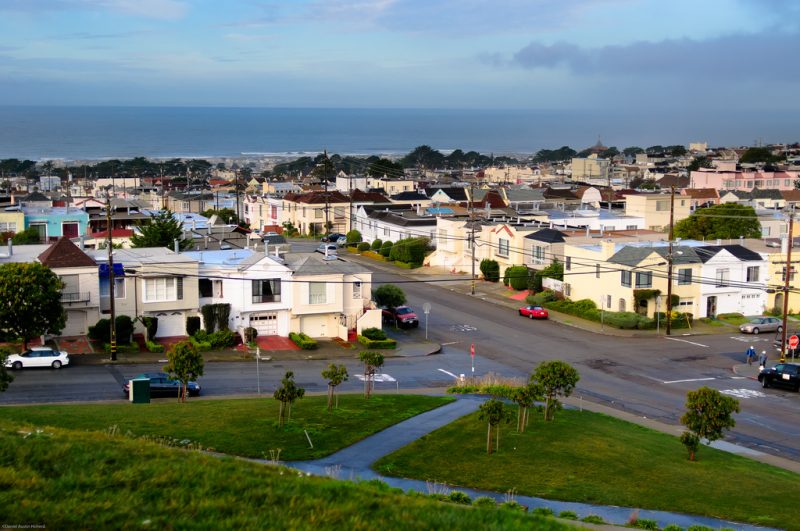 Tucked away in San Francisco‘s southwestern corner, the Parkside neighborhood will appeal to families who seek a quiet, suburban environment without having to sacrifice a city lifestyle.

Established in the early 20th century, Parkside is technically divided into three subdistricts by San Francisco’s MLS. As a whole, these areas are loosely bounded by Rivera Street to the north, 19th Avenue to the east, Sloat Boulevard and Wawona Street to the south, and the Great Highway and Ocean Beach to the west.

Parkside is primarily a residential enclave but has a walkable business corridor along Taraval Street that is busiest in the neighborhood’s eastern section. Locally owned restaurants lining this strip dish up an eclectic range of cuisines from around the globe, and many of the mom-and-pop businesses have operated in the neighborhood for decades, alongside the occasional chain retailer. West of Sunset Boulevard, there are a few more restaurants, shops, and small markets.

As in other neighborhoods in western San Francisco, Parkside residents have plenty of nearby places to enjoy the outdoors and relish the city’s natural beauty. Locals are fond of strolling around tranquil Pine Lake Park, as well as taking in free summer concerts among the eucalyptus trees at contiguous Sigmund Stern Grove. Golden Gate Park and the Presidio, with their wealth of outdoor activities, are a short bus ride away.

Just off Taraval Street, McCoppin Square offers tennis courts, a baseball diamond, and a playground. In the Outer Parkside, Ocean Beach is a popular spot for soaking in a sunny day or surfing, and both local families and tourists can be found exploring the San Francisco Zoo on Sloat Boulevard, where the iconic sign for defunct local landmark Doggie Diner greets visitors from a median.

Housing stock in the neighborhood primarily consists of single-family homes, some of which boast views of the Pacific Ocean. Parkside has a decidedly quiet, suburban feel, and streets receive far less vehicular traffic than those in San Francisco’s busier neighborhoods.

In September, the median sales price for a single-family home in subdistricts 2B (Outer Parkside), 2D (Parkside), and 2G (Inner Parkside) was $1,150,000 according to MLS data, up 15 percent from one year earlier. As in other parts of San Francisco, bidding wars in the neighborhood are commonplace due to a lack of properties on the market. In September, the months’ supply of inventory for single-family homes sold was 1.2, and buyers paid an average of 125 percent of original price.