NEW-HOME SIZES IN U.S. BIGGER THAN EVER
Though the average price for a new home is down a slight 4 percent from its April peak, sizes hit their all-time high in the second quarter, according to The Wall Street Journal. 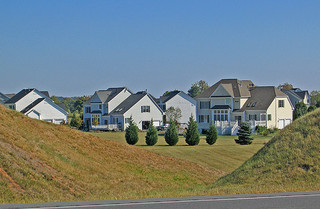 Using data collected by the U.S. Census Bureau, The Wall Street Journal reports that the average size of a newly built U.S. home is 2,642 square feet–3 percent larger than the previous record of 2,561, reached in the first quarter of 2009. New-home sizes increased 5 percent from the first to second quarters of 2013, the biggest quarter-over-quarter gain since 1987.

According to the article, some contractors are purposefully building larger homes in order to turn a profit.

“If you pay top dollar for land, you need to build a bigger home on it to make money,” said John Burns, chief executive of an unnamed Irvine, Calif. home-building firm.

The San Jose metropolitan area was tied for fourth in new-home-size increases over the past three years, with a gain of 15 percent.

According to Redfin, home prices per square foot in 19 U.S. regions were up 1.1 percent from June and 19.3 percent from last July. San Francisco home prices saw a 0.5 percent month-over-month gain and a year-over-year spike of 27.3 percent. In San Jose, the monthly increase was 1.6 percent, while the yearly gain was 24.5 percent.

Sales volume in the nine-county Bay Area reached its highest level in seven years in July and is up 13.3 percent from this time last year.

Meanwhile, housing inventory across the nation declined 4.6 percent from June. While San Francisco experienced a slight month-over-month inventory shrinkage of 1.2 percent, the number of homes on the market in San Jose grew by 7.1 percent. San Jose is the only region included in the study where inventory actually increased from June to July.

PENDING HOME SALES INDEX DECLINES FOR SECOND STRAIGHT MONTH
Pending home sales took a minor drop in July, down 1.3 percent from the previous month, according to the National Association of Realtors.

Pending sales saw the largest month-over-month drops in the Northeast and West, where they declined 6.5 percent and 4.9 percent, respectively. NAR Chief Economist Lawrence Yun said that the regional dips could be due to rising interest rates hitting buyers harder in more expensive areas.

“Higher mortgage interest rates and rising home prices are impacting monthly contract activity in the high-cost regions of the Northeast and the West,” Yun stated.