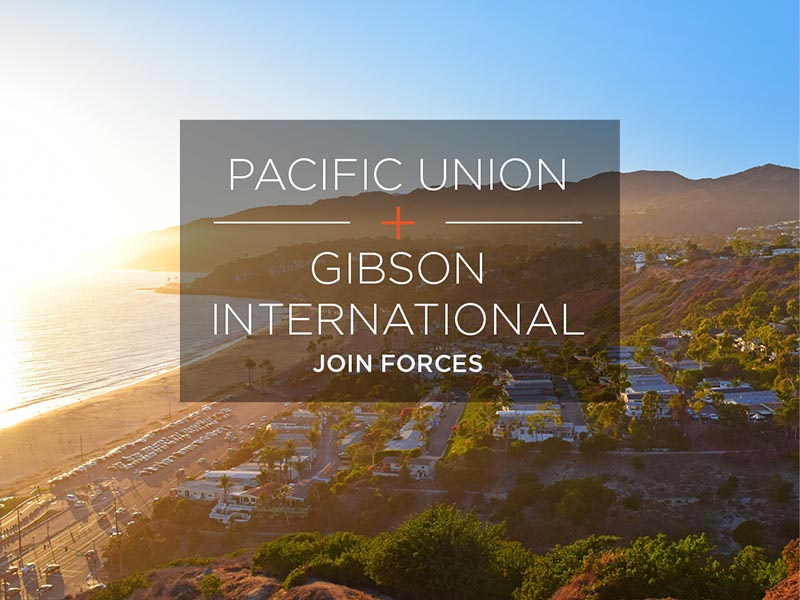 Pacific Union is pleased to announce that we’ve united with Los Angeles-based brokerage Gibson International, the next step on our journey to becoming the ultimate California company.

Pacific Union is now affiliated with more than 1,660 real estate professionals in Northern and Southern California, with projected 2017 sales volume of $14 billion. We rank as the No. 1 independent residential brokerage in California and the eighth largest in the United States by sales volume, according to rankings released earlier this year by REAL Trends and RISMedia.

“When Pat and I made the decision to look for an additional investment partner we knew we wanted to find a group that shares our same values,” Gibson says. “We are a people-centric firm with a culture that provides great value to our real estate professionals. Pacific Union shares this same commitment to its team, and we’re excited to build upon that shared value.”

Pacific Union has been an investor in Gibson International since 2015, and company CEO Mark A. McLaughlin is proud to join forces with the brokerage.

“We have a strong belief in Scott’s exceptional leadership and team,” McLaughlin says. “His brokerage’s strong position on the West Side of Los Angeles makes it an ideal partner for Pacific Union as we realize our vision to become the ultimate California real estate company.”

The move marks Pacific Union’s third expansion in the greater Los Angeles area. In December of 2016, we merged with John Aaroe Group before merging with Partners Trust in August of this year. All three companies will begin operating under the Pacific Union brand in January 2018.