Pacific Union is both proud and humbled to share the news that our CEO Mark A. McLaughlin was one of just 10 American corporate leaders chosen to attend an exclusive meeting at the U.S. Embassy in Beijing earlier this week.

The trip provided McLaughlin with the chance to further share Pacific Union’s vision of elite performance with some of the wealthiest real estate investors in China. 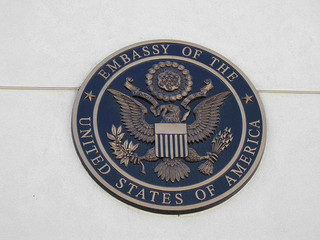 Pacific Union was the only U.S.-based residential real estate firm invited to the prestigious event, and McLaughlin’s attendance underscores our commitment to exceeding client expectations in the key Chinese market – just as we do here in the Bay Area.

“I am humbled by the stature and heritage of Pacific Union’s great brand [and] its acceptance and performance here in China,” said McLaughlin. “This [trip] represented amazing exposure for Pacific Union as the only U.S-based residential real estate firm at these events.”

McLaughlin was one of 30 leaders handpicked to attend a morning meeting at U.S. Ambassador to China Gary Locke’s residence on Dec. 16. During the morning event, multiple Bay Area real estate development opportunities were presented to the group, which included several of the country’s wealthiest individuals.

After the meeting, McLaughlin attended an exclusive luncheon at the ambassador’s residence, where he was selected to sit at the head table with Ambassador Locke, Tishman Speyer President and co-CEO Rob Speyer, and three of the largest real estate developers in China.

An afternoon meeting at the U.S. Embassy’s Bush Auditorium followed, during which 90 more of China’s wealthiest individuals joined the group. Discussions at that meeting centered on real estate development opportunities in the U.S. and fostering successful business partnerships between the two countries.

McLaughlin capped off his busy Monday by attending a small private dinner with nine other guests, including the founder and CEO of heavily trafficked Chinese real estate Web portal Soufun.com.

Calling his trip “exhilarating” and “the experience of a lifetime,” McLaughlin said his attendance at the events helped build on Pacific Union’s growing momentum and recognition in China.

Pacific Union runs a China Concierge Program to help Chinese buyers identify real estate opportunities in the U.S. McLaughlin plans to continue to expand the initiative by hiring a full-time staffer in San Francisco dedicated to assisting buyers in mainland China to invest in Bay Area real estate or relocate to the area.

The company also will launch a Mandarin-language microsite explaining its services.